New Release: WARRIOR OF THE WORLD #Fantasy by @JeffeKennedy 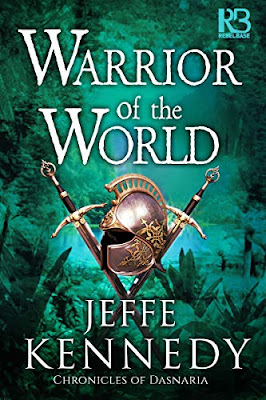 WARRIOR OF THE WORLD
Chronicles of Dasnaria, Book 3


Just beyond the reach of the Twelve Kingdoms, avarice, violence, strategy, and revenge clash around a survivor who could upset the balance of power all across the map . . .

Once Ivariel thought elephants were fairy tales to amuse children. But her ice-encased childhood in Dasnaria’s imperial seraglio was lacking in freedom and justice.. With a new name and an assumed identity as a warrior priestess of Danu, the woman once called Princess Jenna is now a fraud and a fugitive. But as she learns the ways of the beasts and hones new uses for her dancer’s strength, she moves one day further from the memory of her brutal husband. Safe in hot, healing Nyambura, Ivariel holds a good man at arm’s length and trains for the day she’ll be hunted again.

She knows it’s coming. She’s not truly safe, not when her mind clouds with killing rage at unpredictable moments. Not when patient Ochieng’s dreams of a family frighten her to her bones. But it still comes as a shock to Ivariel when long-peaceful Nyambura comes under attack. Until her new people look to their warrior priestess and her elephants to lead them . . .