Do You Need a Critique Group - Or Something ELSE? 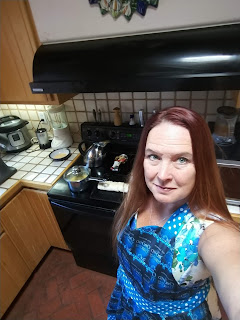 Yesterday I cooked brunch for writer friends Jim Sorenson and Sage Walker. (That's me in my Orchid Throne apron that the amazingly talented Minerva Spencer made for me. Isn't it awesome??)

We sat in the grape arbor, listened to the bluebirds feed their nestlings, and talked all things writing. Sage and Jim are in the Santa Fe crit group I used to attend. I stopped going last fall because... It just didn't feel worth my time. In fact, it sometimes felt counter-productive as a few of the guys in the group always took pains to mention that they weren't my readers. Fair enough - but then how is their critique useful to me? I stuck with it for quite a while (two years or so), because I thought it MIGHT be useful to me, to get feedback from different quarters. When I was first asked to join, several of my friends gave me the head tilt and said, "But do you need a critique group?"

I thought maybe I did, but it turns out I mostly wanted to talk about writing with other writers.

I liked that aspect, I really did! And I believe in critique. I've been in other critique groups and I've had many critique partners over the years. I cannot emphasize how much those relationships have helped me to develop my craft. (I touched on this in my blog post the other day Silly Writer! Reviews Aren’t for Craft.) But one key skill in being a career author is learning what critique to listen to and what to discard. It's not always easy to get past the emotional flinch at someone criticizing your work - so you have to learn to look past emotion and rationally evaluate the feedback - but you also have to be aware of when that feedback is actually damaging.

For me, I noticed that I came away from the critique sessions feeling bad about my work. Not from everyone. Some in the group found flaws and problems, but that feedback had me fired up to fix it. A few other people... well, I just felt bruised. The big test was when I, weeks later, pulled out some written notes they'd made, and the negative impact just slammed into me.

Ouch. And this was on a draft of The Orchid Throne, which St. Martin's liked enough to buy for decent money.

I mention these specifics to add helpful details, because I know it can be really difficult to parse the flinch from the injury. I'm not casting blame at all, because sometimes that's just how it goes. Not everyone who gives you critique is the right person to do it. (Sometimes jealousy factors in and people are mean for no more reason than that, but usually they mean well and are simply not a good fit for your thing.)

What I've found at this point in my writing career is that I really like - and sometimes need - to talk through story stuff, but not necessarily the full critique drill. With Sage and Jim yesterday, we talked about this world I'm building in this New Shiny book/series. They're both super smart about SF and we argued some of the finer points of how this world would work. That was awesome! I liked that they got me to defend my choices, and they suggested a great solution to a conundrum. It was super helpful and fun. Sage has also sent me some thoughts on what I've written so far. I also asked Marcella Burnard - our Friday poster on the SFF Seven - to take a gander at my opening chapters. She had no context or previous exposure coming into the story, so she was able to give me useful thoughts on what information she needed.

So, all of this is by way of saying that there's lots of ways to get feedback from other authors on our work - and also to give it. Knowing what will be helpful to another author whose work you're reading is a skill worth building, too. (And, to touch back on the reviews thing, that is NOT something a reviewer needs to know how to do. They need to know how to give useful information about a book to other readers, so they can decided if the book might be for them.)

What's most important is to do what's right for the work.