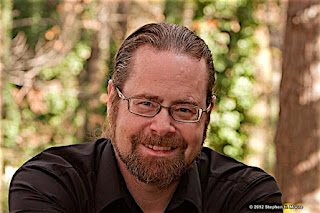 Born into a world full of comic books and far too many transfers from one apartment complex to another, James A. Moore has been an avid reader since he was able to walk. Eventually, he came to understand that the words inside the word balloons on the comic book pages were actually an important part of the story—as important as the pretty pictures—and started considering writing them in addition to reading them.

His first published works were for Marvel Comics, and later for a few role-playing games, but these days Jim focuses mostly on novels and short stories, with a changing focus aiming at dark fantasy and other, stranger concepts. When he’s not writing, Jim works at a local Starbucks (Free coffee ROCKS!) and spends his meager spare time working out and watching DVDs when he’s not reading.

K.A. Krantz
Fantasy Author.
The Immortal Spy Series & LARCOUT now available in eBook and Paperback.
Subscribe to my newsletter to be notified when I release a new book.
Home
Subscribe to: Posts (Atom)