A Heroine to Aspire to

You would think, when I suggest a topic, I’d have a response to my own question in mind. You would think incorrectly. So, apparently, do I.

Like Jeffe, I very much dislike picking a favorite anything, so I’ll claim I haven’t. I’ve just selected a heroine I really wish I was good enough to have written. There are plenty of those, but in the spirit of playing by my own rule, I’m just picking one. 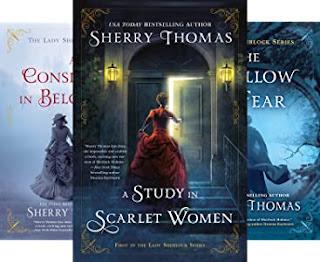 I wish I’d written Charlotte Holmes from Sherry Thomas’s Lady Sherlock series. She’s autistic. She’s brilliant, logical, and driven. She’s focused and her energy propels her story. The key to her humanity, though, is that she’s deeply unwilling to face or admit her vulnerabilities. I love the combination of clever intellect and sloppy emotion that she refuses to process. She stonewalls almost all tender feeling, and her reactions are predictable enough that she leaves herself open to being manipulated (by people she believes she’s manipulating.) I love her because she plays a long, long game. It’s fun.

The thing is, I don’t know if it’s the character I admire, or Sherry Thomas’s exquisite writing. Her facility with Charlotte’s character is exhilarating. I admire the heck out of how lightweight the craft feels when I’m reading the stories. I want to learn how to do that – to create someone complex, filled with contradictions that make complete sense within the story. I still have a lot to learn.