This book doesn't have a title yet. It'll be Enemy something or the other. I just haven't gotten to the something or other yet. The story is resisting pulling together and you know how happy that makes me. But. Like Dad has always liked to say, anything worth doing -- no. That's not the one. You know what? He doesn't have a saying for this. I do. Sometime writing is hard. It'll be worth it. Someday. Today's not that day. Tomorrow doesn't look so great, either.

We're on an alien planet. Bad things are happening. While this is for book four, it the whole 'alien planet, bad things happening, pretty much describes all the openings of the books in my SFR series. Welcome.

Perimeter guards on Anqorre had a distressing tendency to turn up dead, their body parts strewn all over the jungle. When they could be found at all. Since she hadn’t had the good grace to die in her first several firefights, putting her on sentry duty presented the brass with the next best opportunity for getting her killed without having to put a gun to her head themselves.

Though, to be fair, that was likely next.

Ildri stopped walking. She glanced at the dark hulk of jungle. Rain swept the tops of the trees flat. The low roar did nothing to mask bone-shaking thunder. The squall had to be the outer bands of the incoming storm.

No one would sleep in the muddy, misery-plagued camp tonight. Good time to head for the supply ship.

thunder. "Godsdammit, I should have gills.”

I May Have a Reading Problem 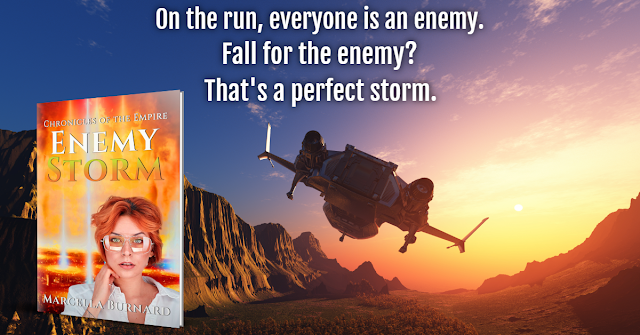 Enemy Storm is available for preorder from Amazon. We should see more preorder links come available shortly. We all know the 'zon likes to beat everyone else to the punch. This is book three of the Chronicles of the Empire SFR series. Unlike Enemy Within (book one) and Enemy Games (book two) this one hasn't been published before now. Official release date is June 10.

Reading
I love to read. Always have. I hope I always will. I love it enough that when I was in sixth or seventh grade, I made a pact with my best friend. We signed up for a speed reading course. We then spent several days in a cramped, dark room with a bunch of airmen learning to not subvocalize while we read. However, I have a pretty serious problem with reading, too. Once I start a book that's good, I don't stop. You know all those memes that go around about what kind of person you are based on how you mark you place in a book? I laugh. Cause I rarely need to mark my place in a book. I read. And read. And read. To the detriment of sleep. And chores. I will grudgingly get up to feed the cats and scoop their boxes. But other than that, the rest of the world can just take care of itself for the few hours it's going to take me to get through whatever I'm reading.

So I try to save reading for rewards. I finish writing a novel, I get to binge read a book or three. I'm like most other people are with Netflix series. Don't get me wrong. A book has to hit my reader buttons in order to merit that kind of attention. A book either makes me turn pages like a freak, or I DNF. There is some gray area in there, but it's not much. Life is too short to finish meh books. The biggest fun I get to have is beta reading other writer's books. Second to that, is finding an author whose writing lights me up. I really don't care what the genre is. Right now, I'm still reading my way through all of the new-to-me, under-represented authors who were promoted in the midst of the last RWA crisis. Some have been really good, and some have not been my cup. But that's the way with everything, I feel. At least I'm still reading. When I'm not on deadline.

What book have you read that surprised you into liking it? (My example - I thought I would hate To Kill a Mockingbird because we *had* to read it for school. Ended up loving it. What's yours?)

The Origin of Story

Story starts in darkness, in the cracks of the self. In nightmares and in dreams. Story starts in everything I believe I hate. It starts in all the self-loathing that drifts through the gray matter spiraling up and flashing like fireflies signaling for mates. It coalesces into noxious fruit I can pluck and examine. Until I learned better, I used to consume that terrible fruit and feed the monsters living inside. Somewhere along the path, and this probably saved my life, I learned to hold the nastiness in my hand and instead ask, "How is this useful?"

The answer is that it's useful in creating characters and plots and conflicts. You'd think I'd be writing horror based on this, but I'm not all snakes, spiders, and blood dripping down the walls. There's the other side of the coin - the deeply, (maybe naively) optimistic part, wanting to believe the best of everyone and everything at all times. That's where the romance and the HEAs come from. The dead bodies and violence are courtesy of the shadow version of me that loves nothing more than to stab happy me in the back with grotesque nightmares and manipulative old awful thought patterns. You know those memes about "Oh, you're trying to sleep? Here let me replay the past 20 years of everything you've done wrong, ever." That's the shadow's favorite weapon.

Grab that weapon, though, turn it over in your hand and ask how it applies to the book you're writing right now - where does my character feel like this - and the blade dulls. It doesn't hurt as much when your shadow tries to stab you with it again. Since I'm doing my best to pretend this is all totally normal and not that I might out to be trussed up in a fancy white jacket, I want to hope this resonates with readers. I hope that my characters and stories and conflicts feel true. Even if the beings experiencing them are darting around the galaxy.

Speaking of which. Guess who got a cover for Enemy Games, Chronicles of the Empire Book Two? This is the first look. Isn't it pretty?? Can I just shout out how much I adore my cover artist, Debbie Taylor?

The release date for this book is October 16, 2019. If you've read this book, I did some rewrites that altered a few scenes. It doesn't change the trajectory of the plot in any way. But there are changes. If that sort of thing matters to you. 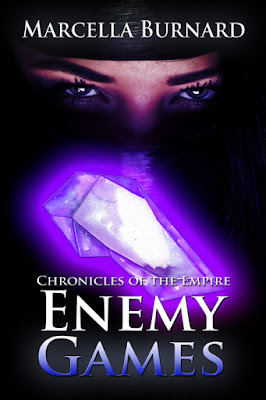