Going for Word Count but Stalling? Three Tips to Get that Flow! 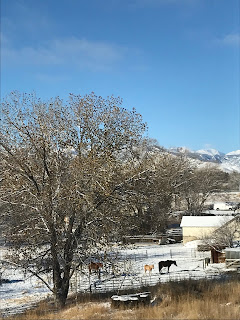 We're up in wintery Buffalo, Wyoming, for my mother-in-law's funeral. This is the pretty view out my (nicely warm) hotel room.

A lot of you out there are embarking on your second week of NaNoWriMo, I know. By now you might be running low on steam. Often the first few days are relatively easy. But, by this point, you might be hitting the "sophomore slump" - when the newness has worn off, but you still have the bulk of the effort ahead of you.

So, if you find you're stalling out, here are three tips to get that flow going again. Check back all this week for more tips from our group of seven professional authors!

Seriously! I know this can feel like not helpful advice, but it's really the best there is. There's a reason that the NaNoWriMo folks say you can do whatever it takes to get that word count, such as having your characters sing all of Don McLean's American Pie. That's because writing feeds writing. The more you do, the better it flows. The analogy of running water through rusty pipes is a good one. At first the water just trickles and there's lots of back-pressure. But then the gunk gradually gives way, the pipes clear, and the water flows better and, eventually, with pristine gusto!

If you're totally stuck, then sure - have them sing a song. But I advise making up the song, even if it sucks or is nonsense. It's better to write something than nothing, but it's even better to write crap than copy someone else. Remember those rusty pipes! It's okay for the water to look mucky at first.

Resist the urge to self-edit before you're done. Nothing stalls the writing process more than going back and spending precious word-count time on revision. Especially if you're new to writing, there's just really no point in revising until you have a FULL, COMPLETED MANUSCRIPT. Yes, you will need to revise someday, but you *really* need to finish first. Besides - consider that rusty pipes analogy. If you're revising while you're still getting those pipes clear, all you're doing is trying to purify crappy water. Let it run clean and flowing first, then you can polish it.

Do your best to write without thinking about it. Imagine you're running water through the pipes. Don't consider word choice or sentence structure or where the story is going or what that character's name should be. I have a trick that I use as I'm drafting. Every time I hit something like that - a character or place I need to name, or a word I can't quite think of - I put in [something], and keep going. When I'm done, usually after I've finished the book, I go back and search for "[" and fill those in. I might do it before, if a good name occurs to me. Or, sometimes when I have my word count for the day, I'll do some research and fill those in. But resist the urge to do that instead of getting word count. Don't try to rationalize that it counts as writing. It doesn't count.