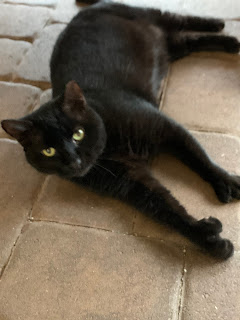 Totally off topic, I'm going to brag for a minute. This handsome man with the nearly opposable thumbs is Hemingway, the neighborhood feral. He found me shortly after I moved in. I established a feeding station for him and all was well until  he showed up limping. After a lot of blood (mine), tears, and hoping, and wishing, I got him healed up. I also managed to convince him that he might be a great big marshmallow underneath that tough feral exterior. Last weekend, I delivered him to his HEA - his forever family. Hell of a delivery trip. They're in Erie, PA. You'll note I am not. As I was completing the trip home, his new family texted to say they were sitting with him and petting his belly. I think he's turned in his feral card.

I'm grateful for the gift of his trust and for his new family. I'm also going to miss him.

It confused me for years. Which one should I use when? Sure, I heard the advice about showing deepening character POV. It didn't click for me until someone suggested I draft everything in first person. That did the trick. It became obvious that immersing myself into the story and the character with a simple "I" brought the world, the other people in that world, and the reactions into much better focus. It became easier to understand that my characters needed to describe what they saw, heard, smelled, tasted, and felt. It helped, but didn't entirely eliminate, major POV violations where my characters assign meaning or motive to someone that they couldn't possibly know without being psychic.

Tell Example: He saw a tree.

Show Example: Cool shadow punctuated by glints of sunlight painted the ground beneath the limbs of the oak into a patchwork quilt of fallen leaves, acorns, and sticks. This passage tells you a little about the character who's taking in all of that detail. Could be someone looking for a shady spot to rest. Could be a squirrel hunting nuts for a winter food stash. Regardless, you probably see that scene. You may feel something from it.

Lovely, Marcella, but this doesn't address when to use one and when to use the other. Not to worry. I got you. I think.

Showing is for deepening reader connection with your characters and your story. It's for pointing up what's important to the character and to the plot. The detail inherent in showing offers your readers hints about what they should pay attention to - this is where red herrings go if you're writing mystery. It's also where the actual clues go. Showing conveys emotion and sinks deep hooks into readers. Showing lends weight to whatever it is you are showing through your character's senses and experiences. Showing takes a reader by the shoulders and shouts PAY ATTENTION.

Telling is for passing action and transitions. The more detail you offer me in a tell, the more I, as a reader, think the detail matters to the plot. Unless you've poisoned it, I do not need you to show me someone reaching for the dull, aged bronze doorknob that's oddly warm in their grasp as if someone else's hand had just left it. Telling passages are for conveying the most necessary stage directions. He opened the door is perfectly adequate if he truly just opened a door without running into fire, zombies, or a hell mouth on the other side. If the important bit is to get the character through the door to the actual scene on the other side, tell me and move on.

Show what matters. Tell stage directions that do not impact plot or character. How do you keep them straight??