Dropping in late January, the sixth book in my Immortal Spy series leads Bix and the Berserkers on a scavenger hunt for the pieces of a potent containment device that will remove a millennia-old cosmic moat from outer space, and allow them to finally deploy the new and improved defense system. But, there are things living in the moat that will not go quietly, things that will force Bix to confront the greatest tragedy she's ever suffered and turn her into the Worlds' biggest threat.


From the Book:
Tobek closed the fingers of his prosthesis around the piece of the containment device still held by Bix. His high-tech amalgam of plastic, rubber, and machinery crumbled into dust. He changed hands, cautiously gripping the triangle. The ink of his heavily tattooed arm and torso illuminated through his T-shirt. The green of his pupils lit, and the vibrant blue of his irises followed.

“Let go, Tobek,” Bix quietly urged.
“I’m learning its resonance.” His voice sounded as though it was rising from a deep well. “Cian is correct. You cannot store this in the Mids. It’s more dangerous to all native life than the ether.”
“Well, that’s interesting, because original me scattered the remaining fragments across the Mids.” Bix tugged the panel, but Tobek held fast.
Drew and Ashtad warily leaned on the table, getting closer to the piece remaining inert in Tobek’s hand even though the Berserker himself was in full-blown woo. Gurp stayed way the hell away from the table, which was odd for the goblin, who prided himself on being a walking forensics lab. He busied himself checking on Cian, which wasn’t odd, come to think of it. People first when it came to Gurp’s great big heart.
“Chief gave us the heads-up that you’re removing the ether so we can push Resen live.” Ashtad got his hand within six inches of the triangle before he snatched it back with a wince. “If Resen was active, we could track the fragments by resonance, but…”
“Anything that’s powerful enough to contain the magic of titans is going to be detrimental to any collective, not just the Mids.” Drew succeeded in touching the triangle but lost half his hand as a result.
↭

Be notified when the book is available by joining my New Release Newsletter!

Yes, yes, yes, our topic this week is "what's our favorite holiday book." Dear Readers, this year, my favorite holiday book is the fourth book in my Immortal Spy series. It drops on December 27! While Bix isn't participating in the holiday spirit in this story, she does have the impeccable timing of helping me hit my personal goal of releasing four books in one year. I may be delivering on that goal by the skin of my teeth, but deliver I shall!


(The Berserkers are all about the winter holidays in Book 3, The Captured Spy, FWIW). 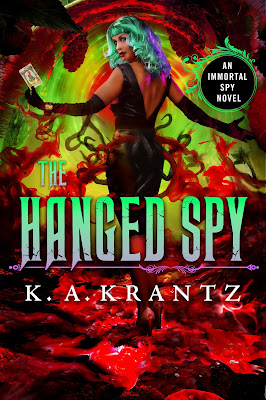 With another amazing cover by Gene Mollica Studios, here is Bix gearing up for her next mission to save the Mid Worlds...

Stealing the build specs for a prototype Mid Worlds defense system pits Bix and her team against the pantheons'  elite wet works unit. Bix’s only chance at success rests in the scarred hands of the Hanged Spy…
Pre-Order the eBook Now:
Amazon  |  iBooks  |  Nook   |  Kobo

Dear Readers, I am thrilled to present the third book in my Immortal Spy Urban Fantasy series, with the fabulous cover by Gene Mollica Studios. 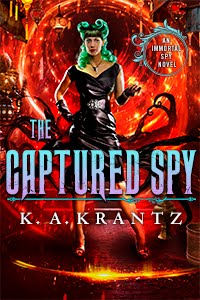 Sometimes the Fates give you a do-over.

Ten years ago, Bix and her team of Dark Ops agents had a mission to rescue one of their own. The mission went pear-shaped; her team died, she was exiled, and the package was never retrieved. The guilt for that failure is a weight Bix can’t shake…until she receives news that the agent is still alive and in possession of technology that could destroy the Mid Worlds. All Bix has to do is break the captured spy out of a top-secret supermax facility and destroy the tech before enemy forces beat her to the punch.

Unfortunately, a prison built of potent magic to contain the Mids’ worst deviants isn’t on any map or radar. To get the necessary intel, Bix will resurrect a menacing identity and reach deep into the criminal underbelly where her legacy is far from forgotten. Old enemies lurk in the shadows, swift to strike. Even the darkness can betray her. As her allies fall, Bix will have to rely on the aid of adversaries to complete her mission. But supermax does strange things to the mind, and some things cannot be undone.


Gods will perish when madness descends upon a captured spy.

It's Tuesday, and I'm thrilled to announce the second book in my Immortal Spy Urban Fantasy series is out today in eBook and paperback! 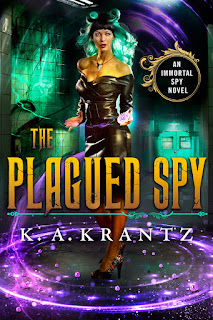 If you missed the first book in the series, THE BURNED SPY is available at Amazon and Other Leading Retailers.

Tooting my own horn today as I release the first book in my new Immortal Spy Urban Fantasy Series. 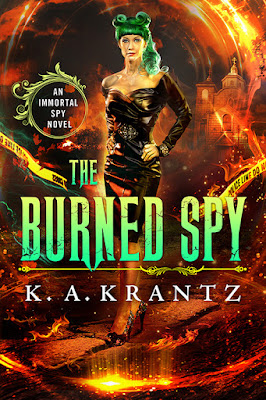 THE BURNED SPY
Gods. Always ready to screw you.

K.A. Krantz
Fantasy Author.
THE BURNED SPY & LARCOUT now available in eBook and Paperback.
Subscribe to my newsletter to be notified when I release a new book.
Older Posts Home
Subscribe to: Posts (Atom)