Meet the Gatekeeper on a Mission from Hel

I mailed my backlist Valentine to the first book in The Immortal Spy Urban Fantasy Series...but with DeJoy still running the post office, it probably won't get to Bix in Old Town Alexandria, VA, until St. Paddy's day.
~cough~
Political snark aside, with the snowstorms locking down the nation more securely than the pandemic, now is a great time to meet Bix, a gatekeeper with amnesia and a vendetta; Tobek, the don't-call-me-a-Viking commander of the Berserkers; and Gurp, the walking forensics lab goblin. Oh, and did I mention Bix's best friend is a body thief and her mentor in the spy game is an electricity-wielding demigod? Go ahead, start a new adventure that will take you across this World and many others. 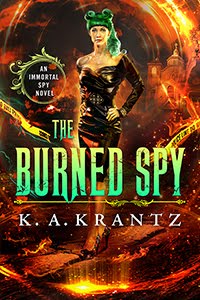 Gods. Always ready to screw you.

Find Out More About The Seven Book Series Here