Taking a Chance on that Love/Hate Thing 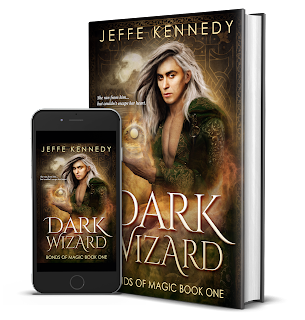 Our topic at the SFF Seven this week is whatever is on our minds.

It's been release week for me, so there's not a lot else on my mind. DARK WIZARD released on Thursday, 2/25/21, and it's been a major ride. And I say this with full self-awareness that I have book releases quite regularly. So much so that I'm sometimes chagrined by how many of the covers down the right side of this group blog are mine.

But, as someone trying to make a living at this gig, and to support my Parkinson's-afflicted hubs, I feel like I have to keep up that pace. If I had a book or series that hit big and made tons of money or garnered juicy options, I would likely ratchet down my pace a bit.

(Or maybe not - I feel like I've found a sustainable pace for productive creativity. I might take more time off between books, alternating writing with business-focused activities.)

I've talked a lot about this on my podcast (listen here or watch on YouTube here) and I wrote a post for the SFF Seven in early January about it, which explains a bit more about what's going on in my life.

But I didn't tell you the entire story there. I glossed a bit. It was too fresh, too raw.

Last year I was seriously hoping that DARK WIZARD would be that "hit big" book. I'd been nurturing the idea for a long time, my agent thought it was a good ones, and she loved the initial pages. She thought it could be a big book, too. We came up with a fantastic, high-concept comp - The Witcher meets The Selection - and I wrote up the first quarter of the book for her. She loved it! My beta readers loved it! There was serious excitement.

Also, though I'd planned to stop there and go on submission with just that much of the book, I couldn't stop. I couldn't write anything else but that. The book had me by the throat and demanded to be written.

I finished it and those who read for me pronounced it probably the best book I'd ever written. In great excitement, I sent it to my agent to read.

We've had conversations since then. She says she doesn't hate it; she just thought it wasn't marketable. Regardless, she had a very strong reaction to the book and she didn't want to take it on submission.

This is something that happens with creative work. I read a study years ago where they looked at the habits of people listening to a radio station. If a song came on that they loved, they'd be happy with the station. But if a song came on that they hated, they'd change the channel. Interestingly enough, it turns out that when people really love something, like a song, a statistically consistent equal number of people will hate it. So, for every person that was happy with the radio station, another was repelled enough to change the channel - not a desired outcome for the advertisers. However, if the person neither loved nor hated the song, they wouldn't change the station. So, the corporate-designed playlists moved to including music that people didn't feel strongly about either way. The triumph of mediocrity.

I think this happened with DARK WIZARD. That while so many of my early readers loved it, my agent was equally repelled. So, as you can likely imagine, I was nervous for release.

You guys, it's been performing so well!

And so far, it's all about the love. People are saying the nicest things about the book, comments about how compelling the world is, how vivid the characters.

Yes, readers are having strong reactions, but that's something I'm happy with. I'll risk the hate to have the love.

"DARK WIZARD is pitch perfect. The best two main characters I've read in a long time. The world is finely drawn and lustrous, the hero and heroine so real, they walk off the page. DARK WIZARD will be on my keeper shelf for freaking ever. I can't wait until book 2 comes out, because I'm desperate for the rest of the story, but also, because I'll get to reread book 1 in preparation. (If I don't reread it sooner, which I probably will.) If you like fantasy romance, clear your day."