On My Mind: Protagonist Age 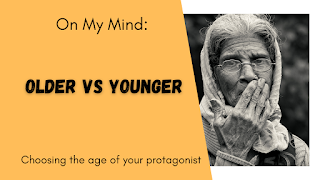 On my mind this week are thoughts about determining the appropriate age for the protagonist(s) of a new high fantasy trilogy that's up next in the writing queue after I finish Bix Book 7. It stems from frequent forum discussions about why there are so few women age 40+ starring as protagonists. It's not to say that there aren't any books that slot that need; it's that women of a certain age remain atypical protagonists.

Is it an issue of the ease of fallibility? The younger they are, the more we forgive stupid decisions. Stupid decisions allow for characters to end up in high-stakes situations far more often and easily than mature characters who know better. After all, brains aren't fully developed until the mid20s.

Is it an issue of fewer responsibilities? Quests are a lot easier when the only responsibility you have is to yourself. As you age, you amass things, people, relationships, and obligations. Responding to an inciting moment for a 40+ carries greater weight than a barely 20 something, yet it's easier? more palatable? more acceptable? for a young adult to cut ties to 'find themselves' or to shirk responsibilities because they can't prioritize?

Is it an issue of implied permission for selfishness? Youth is inherently selfish. The world of a teen/young adult revolves around the individual. Even if they're obsessed with a romantic interest, it is only because they believe that interest will somehow "save" them from whatever ills. If a 50-year-old pulled the same self-centered stunts, they'd be shamed, ridiculed, derided. They wouldn't be heroic, they'd be assholes.

Is it an issue of youthful romance being hot and passionate, where midlife love is dull, tame, boring? Let's face it, as a society, we're conditioned to believe that bedding the hot, young (above the age of consent) thing is a laudable goal regardless of the age difference. But what if a 60-year-old protagonist doesn't want the plaything? Training wheels are tiresome. The drama of youth is tedious. What they want is someone established and content with who they are. They want the butterflies of new love without the angst youthful insecurities. Too blah? No meaty story there?

Is it an issue of a happy stable relationship being a character flaw?  Whatever shall a writer do about romantic tension if their protagonist is in a long-term loving relationship? Default to justifying a cheating scandal? Less heroic, unless they're the one being cheated on, in which case being the victim is trite and overdone. Kill off the loved one as motivation? Again, cliche. It requires more creative effort to show that love can be constant and still have challenges that don't mock or threaten fidelity.

Is it an issue of the ease of inexperience? Imagine, if you will, a youthful protagonist who wasn't an instant expert. Who wasn't in a position of authority because they hadn't earned it yet. Because, gasp, the old folks with tons of hands-on experience were in charge and not inherently evil? Imagine the protagonist in a position of leadership has to quell another uprising of privileged, entitled youths who can't conceive of the world beyond their limited experience. Is that as interesting as the story of rebellion told through the eyes of the youth?

Is it an issue of mass appeal? Since every adult has been young and precocious in their own way, does it make a story more relatable to the masses if the protag is also young? Does having an older protagonist limit reader enjoyment because of conscious or unconscious ageism? Is "she's too old to do that" a fault of reader perception or author creativity?

Obviously, I don't have answers. I'm still working through the tradeoffs of an older versus a younger protagonist. Opinions? Considerations? Tell me about them in the Comments!