For a touch of irony, here's the cover of my next book, entitled THE GODLESS. It's out in September. The premise? For the Sa'ba Taalor the gods are everything. They hear the gods in their hearts at all times. But what happens when for the first time in their entire lives, the gods go silent? 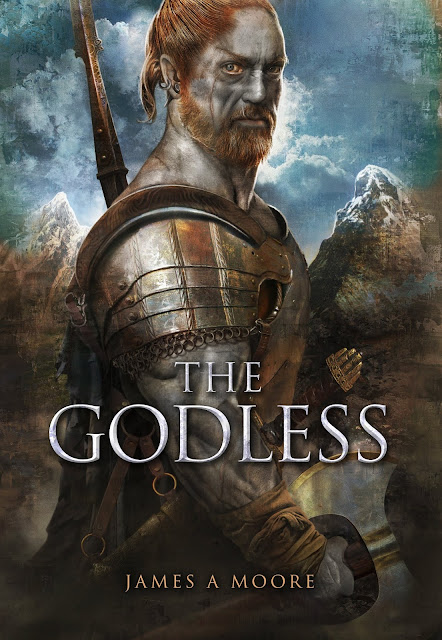 I've said it many times. I am NOT a religious man. Never much cared for it myself.  Faith I have, but I don't follow any particular religion. There' a difference.

But I acknowledge that religion is a huge part of the world, and it's just as big in my fiction. A belief system in gods has been a formative part of our world for centuries. Why would we think it would be otherwise elsewhere?

I mean, you could probably make that a part of a major storyline but it would be a damned big vacuum to fill. Faith, religion, politics, power...they go hand in hand in a great deal of western society. Ever hear of the Inquisition? How about Buddism? They've definitely had their points of impact across the world.

How you choose to use religion (and faith) is entirely up to you, but I think it's fair to say that my SEVEN FORGES novels wouldn't work at all if the gods did not interfere on a literally daily basis. There are seven gods of war, and they drive and shape their followers to be living weapons in their names. Their people, the Sa'ba Taalor, are feared by everyone because they are literally all fanatics, ready to die for their gods or kill for them without hesitation. That is hardly the only example of my writing where religion is key but it's the most direct example.

Religion is, by necessity, a power. Religions that do not get a powerful backing do not last, but in the process of becoming a power, the administration of said religion is very likely to get their hand dirty, to say the least. n the name of God the Catholic Church has caused and ended wars,  brought ruination to entire cultures, forced millions to follow their beliefs with swords and fire and bribery and blackmail. In order to hide their secrets they have lied, broken laws, twisted the facts to suit their needs and very likely committed murder on a few occasions if the accusations are to be believed. And that, friends and neighbors, is me being non-judgemental. Look at the history of the church and it's all there in black and white.

Whether or not you believe the accusations, it certainly does make an interesting plot point in almost any story involving a Catholic priest, a nun or the occasional zealot, to say nothing of tales of exorcism.

Yes, religion has its place in fiction, just as it does in the world at large. We would not be who we are if not for the faith of the many and the beliefs of the masses. Our world history could not have been shaped the way it has been without a belief in the Almighty...or at least a willingness to exploit that belief.

Your mileage may vary.