In dubious honor of the Ides of March, we're outing our most villainous characters--either the ones we've written or the ones we love to hate that someone else has written. 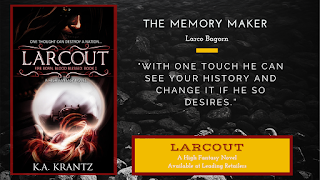 My most evil, hateful, and malicious villain? Larco Bagorn from LARCOUT. He's king of the country by right of birth. A member of the order of Dark Minds, he is a Memory Maker. With one touch, with the power to see people's pasts and change them with just one touch. He has zero guilt or hesitation to use his gift. His top 5 most dastardly deeds:

Power is a dangerous thing, especially when no one can call you to account...until the hero shows up.