What Makes a Perfect Villain 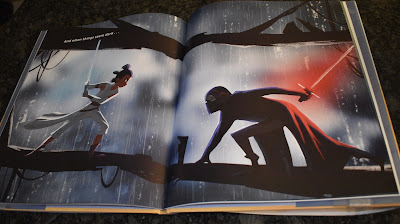 my son's book of Star Wars: The Rise of Skywalker The Galaxy Needs You illustration by Eda Kaban

Villain [vil-uhn] noun: a cruelly malicious person who is involved in or devoted to wickedness or crime.

This week we’re talking about the most dastardly characters, those cackling antagonists, those thorns in our hero’s sides. If they’re done well we love to hate them. And my award for Favorite Backstabber goes to Kylo Ren!

If you’ve been hiding in the dark side, Kylo Ren is from StarWars and fills the role of villain against Rey in Star Wars: The Force Awakens. And in these movies he’s identified as being neither Jedi (the good guys) nor Sith (the baddies).

Wait…I named my top villain as one that’s neither good nor bad?!?

I believe there’s good and evil in each one of us and it comes down to the decisions we make each day that determine what type of person we are. We are all our own hero, but I know there’ve been times—I worked as a manager for five years—when I made choices I believed were the best course of action that made me a villain in another’s story.

That’s why Kylo Ren is the most dastardly, perfect villain. He represents us and our struggles to choose the right path. As you watch The Force Awakens you see him face these tough decisions—hoping he’ll choose the right one—but you don’t feel totally confident that he will.

Your villain should be part of, either physically or in spirit, every plot point in your story.

And that’s good writing. That should be our goal as authors, to craft a villain that’s vital to the plot. Your villain should be part of, either physically or in spirit, every plot point in your story. No, you don’t have to think up a super complicated reason why they do what they do. You should be able to answer/write what drives your antagonist in one sentence, not in pages of backstory.

If you’re feeling stuck in your WIP or struggling with a book idea that doesn’t seem to go anywhere, check out your villain. Make sure they’re more than an evil genius who wants to take over the world. Or if that’s their thing, then also give them a tangible reason on a smaller scale. We’ve all heard about humanizing the antagonist to capture the audience in order to deliver a solid punch when the hero wins the day, so be sure add in some depth, but not so much that it overshadows your hero.

Did this give you any ideas on crafting your current villain? Do you have a fave antagonist that inspires your writing?