Why Do We Love Our Backlists? 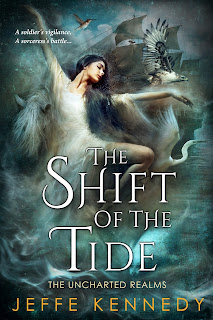 This week at the SFF Seven we're giving our backlists some love. For those not in the swim of publishing lingo, the backlist is any of an author's books that aren't the front and center new release.

It's good to send some love to those backlist aunties, the books that are not the fresh, sweet debutantes, but who truly keep the family going. When I first started out, an author told me that the key to making a living as a writer is to have a healthy backlist. That's the steady bread and butter, that passive income that keeps earning for you without additional work on your part.

It was such great advice!

So I'm giving a valentine to THE SHIFT OF THE TIDE. This is still one of my bestselling Indie novels, and remains one of my favorite covers and characters. A friend once remarked that Zynda is more like me than most of my heroines, and it's true. Which is odd because she's a shapeshifter, not human at all.

What does this say about me? Let's not go there.

ANYWAY, THE SHIFT OF THE TIDE has not only earned me the most money of any of my Indie books, it's my fourth highest Indie seller when I normalize over time, too. She's a good auntie to me!

Released from the grip of a tyrant, the Twelve Kingdoms have thrown all that touch them into chaos. As the borders open, new enemies emerge to vie for their hard-won power—and old deceptions crumble under the strain…

The most talented shapeshifter of her generation, Zynda has one love in her life: freedom. The open air above her, the water before her, the sun on her skin or wings or fur—their sensual glories more than make up for her loneliness. She serves the High Queen’s company well, but she can’t trust her allies with her secrets, or the secrets of her people. Best that she should keep her distance, alone.

Except wherever she escapes, Marskal, the Queen’s quiet lieutenant, seems to find her. Solid, stubborn, and disciplined, he’s no more fluid than rock. Yet he knows what she likes, what thrills and unnerves her, when she’s hiding something. His lithe warrior’s body promises pleasure she has gone too long without. But no matter how careful, how tender, how incendiary he is, only Zynda can know the sacrifice she must make for her people’s future—and the time is drawing near…