Loving Up the Backlist

A funny thing happened at the day job last week. The manager said, "I need a Powerpoint of ALL your novels. Give me cover, reviews, awards, and a snippet of dialogue. We're trying to sell you into a gig writing character dialogue, so give me different character voices so we can play that up. Oh. And we need that NOW." 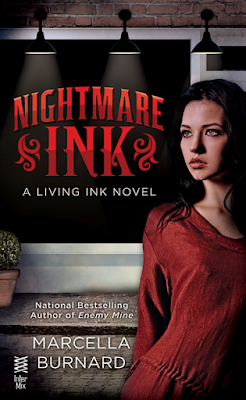 Imagine my delight then, to find this is backlist love week and I just happen to have the backlist in a neat, tidy set of slides. I'm not going to copy in an entire Powerpoint deck. I'm not that much of a monster. Usually.

The piece of backlist I'll point up is Nightmare Ink. While searching for a snippet of dialogue that showed up a bit of character, I kept finding myself getting sucked into the story - as if I hadn't written it. That seemed like a reasonable criteria for selection. Here's the snippet and the review I found on Amazon that warmed the frosty cockles of my heart.

The creature shrilled in Isa’s head.

“SHUT UP!” she shouted, yanking her hand free of Zoog’s skin. “I can’t just kill it!”

Silence settled over the studio.

Surprise at the pronouncement rocked her. The chill in her gut dissipated, but it took several seconds for the heat and smell of sage to drive away nausea.

“What do you mean you can’t just kill it?” Zoog said. His voice sounded stronger.

He scowled and shook his head. “You make it sound like it’s alive, babe. This is nothing but Ink and magic, right?”

“Who told you that?” she snapped.

He propped himself up on his elbows and levered himself up to look her in the eye. “Daniel. While he was inking me.”

Isa shivered. She shut out disquiet with a bracing dose of anger. “What? Daniel thinks he’s God, creating animate constructs with Ink and magic? What did you think while he was inking you, Zoog? That he’d birthed the animating force out his ass?”

He barked a strangled laugh. “You have a way with words, Ice.”
“Part of my charm.”

“In part.” She smoothed damp palms down her jeans.
The Sweet Review:

I have to say - this one surprised me. What a great concept, and unique world-building.

Isa has magic and can create Living Ink, although chooses not to do it because it's dangerous. Live ink is exactly what it sounds like. Whatever is tattooed on your body, is alive, and shares living space with you.

What she does do is bind ink on those who have live ink when it goes rogue and attempts to leave the body. How creepy is that? Especially for someone who has tattoos?

Someone is summoning all of the live ink off their host's bodies, and it's killing them and the host in the process. Isa may be one of them after a psycho kidnaps her and tattoos live ink on her unless she can stop them.

Isa is an interesting character with an interesting back story, that slowly starts to come out throughout the book. She's tough and likable, and you can't wait to see her kick some ass after what's been done to her.

I couldn't put this book down. It was action-packed from the moment I turned the first page. There is a small love interest although it doesn't really turn into much of anything until late in the book, I assume it will be full-blown in the next book.