Not A Fan of Too Much Change

The theme for the week is to identify the one thing we need most in our life.

Well, ok, personally I’m all about stability. I like things to proceed on an even keel, no big surprises, just follow my routine basically. Feed the cats when they expect to eat, do the grocery shopping on Friday, see my new grandbaby on Thursday afternoon, pay the rent on the 1st of the month, see the dentist once a quarter…write this post on Saturday morning…etc., etc., etc. And then since things are so calm and peaceful and serene, and going as expected, I feel free to spend hours at my desk every day writing all kinds of science fiction chaos and mayhem (but with Happily Ever After endings).

Which is all very nice and lovely but life doesn’t actually work that way, or not for too long anyway. I’d have to have the total control of Billy Mumy in that old episode of “Twilight Zone” where he held everyone hostage to his wishes, and pretty much ran things. “It’s A Good Life” was not actually all that good for anyone but his character! (But what ever was, in the Twilight Zone?) Total control over everything doesn’t turn out too well. As Marcella said in her post on Friday, we need change even if we don’t necessarily always welcome it at first. Change opens up new possibilities and fresh approaches.

I don’t tend to react well to change. My family has learned to tell me stuff wayyyyy up front so I can mentally switch gears and go through my own laborious process of resistance, grumbling, acceptance, embracing and then enjoying. I do get there, but it takes a while. Don’t ask any of them what it was like when I found out two years ago that the owner of the condo I was renting had decided to sell (not to me) and I had to move. This was the place I’d expected to live for decades LOL. Silly me.

Probably a better metaphor for my life than the depressing Twilight Zone episode is the fact that I live in Southern California, in a supremely earthquake-prone location. In fact, I was once informed by a very famous seismologist that my house (at the time) sat right on a little known fault and based on the historical record, if that part of the fault broke in a quake, my house and everything around it would go up OR down at least 18’ in the blink of an eye. Well, who knew?

But obviously I realize as a whole my area is geographically

unstable and could let go in a riproaring CHANGE at any second (and no, The Rock wouldn’t be here to save me and my cats), yet still I live here. Life is very much like that, I believe. We do the best we can and then when change occurs and is the opposite of ‘stable’, we cope.

This coming week is the 29th anniversary of the day my high school sweetheart husband went out the door for a bike ride with a friend and ten minutes later the neighbors were at the same door telling me there’d been a terrible accident. That event left me a very young widow with a three year old and a five year old, and was probably THE biggest change I’ll ever experience in life. Literally everything was ripped apart and had to be put back together one step at a time. Those ten minutes redirected the entire course of my life thereafter.

So you’ll forgive me if I’m very adamant about how much I need stability. Yes, I can and will cope with the minor and major catastrophes life throws at us (as well as the VERY good things – hello, grandbaby!)  but if it’s all the same to you, I’ve done my share and would like to just peacefully go about writing my space operas.

(Speaking of which, Mission to Mahjundar is on sale at the moment...I was actually working on a very early draft of this book when my husband died...he would have been very proud to see that it did get published eventually and was an award winning novel. He was always my biggest fan and cheerleader, when it came to my writing and my attempts to become a published author. I could not have asked for a more supportive spouse and best friend, and feel blessed to have had him in my life for as many years as I did. This anniversary is always something of a challenging time for me, so I hope I haven't gone too personal here.) 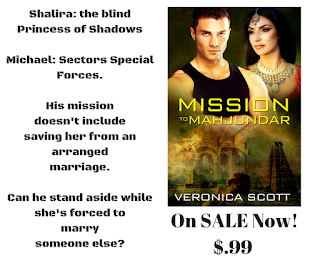