What Blender Setting Do You Go For? 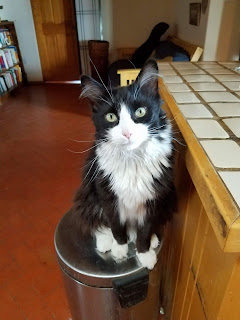 We've been on a long road trip this last week, seeing all kinds of family. And leaving the cats behind, like the monsters we are. Here is Jackson showing off his best Pitiful Abandoned Kitty face.

Thus, I'm late posting today. But so it goes!

I've shared this news elsewhere, but I'm happy to share again here! Many of you have asked what I'm up to with various writing projects, including a few delayed ones. (Yes, the next Sorcerous Moons books are coming - I promise!) Basically what happened is that I changed agents back in February/March. And then I worked up something entirely fresh for New Agent Sarah Younger. Basically I gave her a list of ideas, we debated them, and I wrote 100 pages of one of her top three choices - the one I loved best. We went back and forth on it with several revisions. That's a great benefit of working with an agent as sharp as Sarah. She gave me great feedback on the book, tightening it up and making it the best it could be. Basically we spent three months working on this.

Which meant I kept setting aside other writing projects to work on the next round of THRONE OF FLOWERS, THRONE OF ASH. Thus my entire schedule getting delayed and shuffled. The beautiful part is, when Sarah took this out on submission, we had tons of interest, multiple offers, and a sale two weeks later. And here it is!!

These books won't start coming out until 2019, so now I can go back to a regular schedule. Which absolutely means finishing both the Sorcerous Moons and Missed Connections series. The other thing that happened is that Kensington, who published my Twelve Kingdoms and Uncharted Realms books, started up a new SFF (Science Fiction and Fantasy) imprint called Rebel Base Books. They wanted to publish THE SHIFT OF THE TIDE, but that would have delayed its release until March of 2018 and I knew you all would have fits. (See? I do love you and want you to be happy. I really do!)

So, we said no on that, but they really wanted me to be part of this new imprint, so we settled on me writing a trilogy for them set in the Twelve Kingdoms world. It will be high fantasy, which means less of a romance arc. BUT, I'm pretty sure it will be Jenna's story. For those of you who know what that means! We finished talking about that right before the other submission, so that got announced at the same time.

All that taken care of, our topic this week is Scrapbooking—taking stories from real life as the springboard for your stories and subplots. I'm going to keep this short, mostly to kick off the topic. I love Amanda Palmer and Neil Gaiman's thoughts on "blender settings." Basically they say that all creative types take our real life experiences and metaphorically put them in a blender which produces the smoothie of our art. The big difference is what "setting" we put the blender on.

They've had to figure this out in their marriage, because they have such different blender settings. Amanda, a singer/songwriter and performance artist, has a very low blender setting. What she experiences, she turns around and shares in big chunks that are recognizably her art. Neil, as a writer of fantasy, has a very high setting - you almost can't recognize his real life in the final stories.

Neither is right or wrong - both of them are accomplished artists - but it took some doing for them to come to terms with how they each processed experiences. Especially for him with her putting so much of her - now their - personal life out there as part of her art.

What's most important is to find what works for you. My standard advice: discover your process and own it!