Gawk at embarrassing thing I wrote in high school!

Grumble!grumble at a crackly stack of old papers from the right era—and with that gray-brown Big Chief Tablet paper, which feels soooo delicious beneath a ballpoint pen, ah memory!—but doesn’t contain the thing I was looking for. Shove box back under bed. Reach for next, only there isn’t one because apparently I was able at one miraculous point in my adult life to throw something away, which in general is a good thing, only I wish I’d kept this one thing because—

Oh! Hi. Sorry. I meant to post earlier, but I’ve been treasure hunting all morning and time got away from me.

This week on SFF Seven we’re posting the earliest bit of our writing we can get our hands on, and I really thought I’d saved  this thing I wrote in seventh grade called “The Golden Walnut,” which was part court intrigue, part murder mystery, and revolved around a prince hunting down his mother’s assassin. It was the first thing I finished, so if you’ve defining a story as a thing with a beginning, middle, and end, this was my first. I had hoped to share some of it and solicit giggles, but I can’t find the thing.

After the walnut story, I wrote a lot of angsty, emo crud, and by that time I was using a computer, so I do, unfortunately for your eyeballs, have an early story from back then. It’s a Russian vampire fairy tale with lots of murder in it and is, uh, pretty bad. I’ll just screenshot the first few lines here. 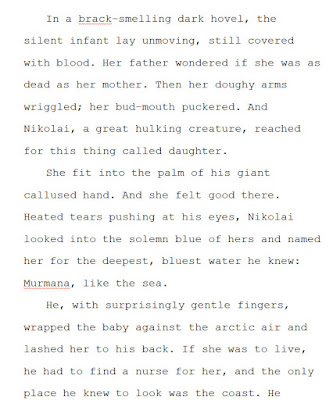 I guess in between the era of the walnut story (middle school) and the vampire story (high school) I didn’t grow much beyond the beginning-middle-and-end understanding of what makes a story. Even though I read canon and wrote papers about tons of books in college, it was like for the purposes of my own work, I didn’t understand the first thing about narrative voice or point of view or theme or genre. That Russian vampire story? Is about the baby. She’s the one who grows up and becomes a vampire. There’s no reason to start with her birth, teenage-me! You start at the good part! The killing-people part! What were you even thinking?!

(I was also somewhat bloodthirsty as a beginning writer. I’m sure a psychologist would have a field day trying to trace a path from that brain to the one that just wrote three fluffy-sweet romance novels.)

At any rate, there was a whole era where I had no idea how to write a story or what even made a story. I could wield gorgeous grammar – did you see that semicolon?—and even lay down a nice scene here or there, but tying it all together eluded me. I was writing okay stuff, but there was no point to it. And if there is no point to it, there is no reason for a reader to invest the time to read it.

I tried to crack the nut of storytelling for a long time, churning out flowy sentences and occasionally some nice scenes, exhausting my fingers with a crud-ton of fanfiction, even begging advice from more experienced writers. (Note: Critique groups that spend a lot of time talking about first sentences and the overuse of the word “was” might be super helpful for low-level sentence crafting, but they are completely useless for learning how to compose an entire story.) Eventually, I found my way to the Austin chapter of Romance Writers of America, and specifically to a little critique group there which was run at the time by Skyler White. Y’all, I learned so much in such a short amount of time. The last decade has been a thrill ride like crazy.

I can’t put it all here, but the eureka moment for me was when I learned that all those books I read in college and wrote long, thoughty papers about? Were stories! Penned by people! And I am also a person!

Shut up, this was a revelation.

What I’m trying to say, I guess, is that the core lesson of storytelling, the thing that changed my life, was realizing that I don’t have to invent storytelling. There’s a long history of it, in every language on the planet, a deep treasure trove of shapes and sizes and purposes, a giant bin of bright-colored candy that we can reach in and grab and lick.

Okay, that might have been a bit much. But you get the point. Things changed for me when i realized that good writing isn’t sentences or semicolons. It’s stories. Yeah with beginnings, middles, ends, but also with treasure nuggets of purpose.