I am one lucky writer. Somehow, I managed to make friends with a bunch of scientists and Air Force test pilots. 99% of the time, this is awesome. 1% of the time, it bites me in the butt when they ping me to tell me I got something wrong. Most of the time, all I can do is gnash my teeth and whine. Cause usually, you can't correct a published book. No one is gone redo a print run because you got the hero's eye color wrong on page 387. BUT. At some magical point, it is within an author's power to request reversion of rights. And when that happens, it's a whole new world, baby.

So would I change things? Yes. Have done. Would do it again. IT'S TOTALLY WORTH IT. I say this as someone who has a thing about needing to be right. Maybe it's oldest child syndrome. Dunno. I've spent lots of years trying to get over myself and learning to embrace my mistakes with grace. Even if I'm gritting my teeth whilst doing so. But when I got the rights back for the Enemy series, I hit up my scientist and pilot friends, asking for a list of where I'd gone wrong specifically so I could fix my errors for the rerelease versions of the stories.

I got that list. The worst one was that I'd messed up insect life cycles when I should have known better. I hope to all the gods those are fixed now. There was also a scene in the second book of the series that I wished I'd handled differently.  Ten years of wishing. Now it's about to be published again, so I rewrote the scene. I think I'm finally happy with it.

Maybe it's a rare thing to get to tweak what should be left in the past. My ability to tweak existing books is at an end now because we've moved on books that haven't yet been published anywhere else. So my day in the sunshine of fixing what was broken may well be over. At least until the dev edits for book three land.

You know this wouldn't be a Marcella post without a cat photo, so behold Bug, a tiny, two month old kitten who'd been dumped at the feral colony. She came to me skin and bones and with massive eye infections. She was adopted yesterday to a lovely lady who shows Persians. She's going to show Bug in the household pet division. The great thing is that Bug's new mom has an Instagram account, so I can cute-stalk my former medical foster kitten and watch her grow up from afar. 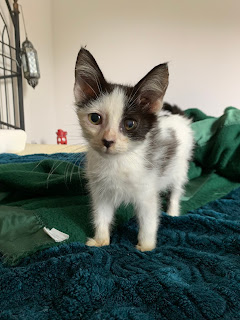