Saying No Thanks to A Magic Do Over

Our topic this week on SFF7: Free ReDo: If you could automagically change anything in any of your books, would you?
Short answer: No.

I don’t publish a book until I’m happy with it so….and of course being self published, I don't have to agree with any editorial changes such as a publisher might want and be contractually entitled to demand.

I have mentioned in this space in the past when we had a similar subject, a few things I wish I’d done differently with Warrior of the Nile (published by Carina Press). It was the second book in what is now an eight book series. Here’s the relevant bit:

I do a TON of research, all the time, into various aspects of ancient Egypt, but for this book, I veered off the track in the hero’s backstory in my opinion. I made him the last survivor of a mountain tribe that had its own gods and myths (conveniently created by me to fit my story), although since he was adopted by Pharaoh’s family at a young age, he also subscribed to the Egyptian beliefs. Indeed, the entire book revolves around a demand made by the goddess Nephthys and her personal involvement in the quest.

In fact, however, much of how the book’s plot is resolved ties back to this personal belief system the hero Khenet retains. There’s a key scene in a ruined temple belonging to an ancient goddess predating Egypt, again all from my own inventive brain. There’s another pivotal moment where Khenet receives a bit of help from his tribe’s god, fulfilling a prophecy. And then there are these jewels….
Now if I’d been writing fantasy, nothing wrong with creating and injecting all kinds of cool new mythos and lore and etc.

But I really try to tell these stories from the standpoint that the gods exist and interact in the daily life circa 1550 BCE the way the ancient Egyptians believed they did, and very much wanted them to do. I feel the success of the later books in the series revolves around that key aspect. Not in taking giant departures and left turns from the overall Egyptian culture. (Liberties and conscious anachronisms, yes. Wholesale invention of new stuff – no.)  So to me, book two rings bit false now, like a brass bell in a lineup of silver ones. Not the same tone. I haven’t repeated that ‘mistake’. I find a way to make my plots happen much more concisely within the ancient Egyptian framework. They had such a complex civilization and belief system to match.

Don't get me wrong - I like the book and my hero, I love some of the 'Egyptian' elements in it wildly, like Lady Tuya's visit to the goddess Isis...I just think I moved away from what's at the core of my Gods of Egypt series by injecting a fantasy side story that had no roots in anything the Egyptians believed.
I’m not writing historicals. I am writing paranormal elements but I’ve always felt with Warrior I went too far away from what keeps me (and my readers) grounded in the Land of the Pharaohs as I visualize it.

OK, but when (if) I get the rights back in 2020, will I rewrite this? No. The story is the story and it all hangs together nice and tight. I just took a lesson learned from that experience and have worked hard not to go quite so far afield from actual ancient Egypt in the rest of the series. 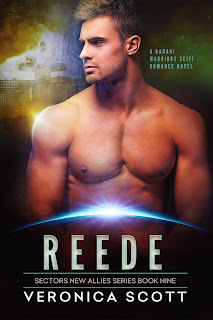 By the way, I have a new science fiction romance release to report! REEDE, the tenth book in my Badari Warriors series about genetically engineered soldiers of the far future. The book is numbered as #9 but that’s because TIMTUR is book #2.5. Sorry for the confusion!) Here’s the blurb:

Lt. Fallyn Damara was sent by the Sectors to investigate a strange transmission from an isolated planet and determine whether the residents of a vanished colony had been transported there by alien enemies. Fallyn’s ship crashes and she’s taken prisoner by the Khagrish scientists, to await her fate in the slate of horrifying experiments being conducted.

Reede, the second ranking enforcer in the Badari Warrior pack, volunteers to be recaptured by the Khagrish in an effort to locate and rescue Fallyn inside the deadly lab complex.

While a prisoner Reede discovers Fallyn is the woman destined to become his fated mate but the moment is bittersweet because Fallyn will be leaving their world at the first opportunity, to report back to the Sectors. He refuses to complete the mate bond, believing to do so will lead to nothing but lifelong misery for them both, separated by lightyears and interstellar politics.

For her part, Fallyn wants to shake up the rule-bound enforcer and persuade him to take a chance on love.

But first they have to escape the Khagrish. 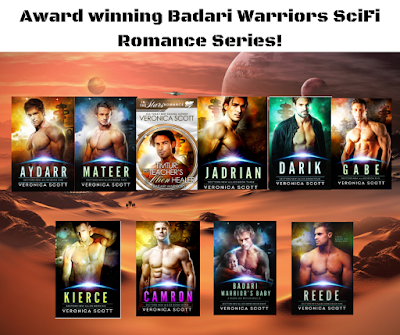