What Was the First Book You Ever Bought? 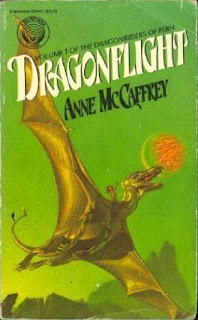 Our topic at the SFF Seven this week is the first book bought with your own money.

I usually look at the topic a few days ahead, to put in the back of my mind and mull. So I've been thinking about this question for a few days. And, really, I have NO IDEA.

There were a *lot* of books in my youth. My mom and I visited the library every Wednesday afternoon, where I was allowed to select five books and no more. Sometimes I ran out before the next Wednesday arrived. But even then I had books in reserve on my shelves - ones I had already read and ones I hadn't - because people gave me books as gifts. And there were always my mom's books to get into.

I read an awful lot of books that I didn't love, simply because I had nothing else to read. Back then I had no concept that maybe I wouldn't like a book, or that a book might be beyond me at that point in time. Some of the gifted books, while well-intentioned, had likely been bought on bookseller recommendations. You know the "well, she likes fantasy" and so someone gave me the box set of Stephen R. Donaldson's Chronicles of Thomas Covenant when I was WAY too young to understand it. I can't tell you how many times I started Lord Foul's Bane and bounced off. Same with Tolkein's The Silmarillion. I don't think anyone realized the vast distance between reading The Hobbit and that.

I started earning my own money when I was... seven? Eight? I think it was after my mom remarried (my father had died several year previous) and my stepdad believed in giving an allowance and assigning chores. I received $5/week, but I don't recall what I spent it on. Maybe I was older? I know I started babysitting when I was twelve, and that's when I had actual pocket money that I saved up. I remember saving up to buy this crystal bird on a brass hoop for something outrageous like $75. (I still have it!)

And I have a very clear memory of buying Anne McCaffrey's DRAGONFLIGHT. The book was first published in 1968, but I definitely bought this edition. (That pic is an actual scan of the book, which I also still have.) That edition came out in 1979, according to Goodreads, which would have meant I was likely twelve. I do know I spotted it on the mass-market paperback display at mall bookstore - probably a B.Dalton - and feeling that rush of sheer astonishment and joy.

See, I'd read DRAGONSONG in my elementary school library when I was ten, and loved loved loved it. I had no idea that there might be *other* books by the same author, and in the same world! Back then the world of books and series was much more opaque. Whatever was on the bookstore or library shelf was all that existed, so far as readers knew. There really wasn't much of a way to find out more. You could ask booksellers and librarians, but they only had limited means to look stuff up.

Anyway, reader, I bought the book. For $1.95 - a substantial dent in my weekly allowance, but I paid it gladly. And I bought the sequels. And related books. I cheerfully spent most of my allowance on books, then threw myself into babysitting with enthusiasm so I could continue to afford the habit.

A habit that continues to this day. I very much believe in buying books. I figure what goes around comes around, and if I want people to buy my books, I should buy their books. It's always entertaining when tax time rolls around and I add it all up. I spend easily a couple of thousand dollars each year on books.

Money well spent. My twelve year old self would approve.