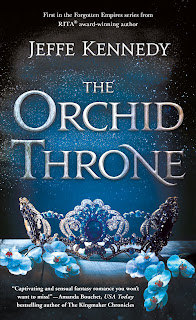 I can't believe that THE ORCHID THRONE releases this week! Feels like it was forever away for so long, and suddenly it's here. Woo hoo!

Yeah, we've all seen it - those cringeworthy stereotypes that only point up the problem.

This is a big topic, and I'm looking forward to thoughts and methods from the rest  of the crew here at the SFF Seven, and I'm going to focus on a first step.

Yeah... we all know about good intentions and the road to hell. That saying comes about because simply having good intentions without thoughtful execution can go sour real quick. Also because "good" intentions often aren't. They're motivations shrouded in the appearance of goodness. Motivations that are selfish or self-serving, or plain terrible.

So, the first thing to do is examine our own intentions behind the desire to create more representation in our stories. In other words, if we're setting out to do this because we're afraid of getting in trouble if we don't, or because we're "supposed to," or because that's the hip thing to do, then there's a problem - and those are the kind of surface "good" intentions that lead to hell on earth.

One clue? If you're looking for a set of rules to follow, or boxes to tick off, then maybe you're not setting out with the right intentions.

A better mindset is to start from a place of wanting to include characters who don't share our exact life experience. Get in the habit of indicating the skin color of ALL characters, the sexual orientation and self-identified gender of your characters, having people from a broad array of socio-economic backgrounds. Keep a list if you have to and check to see if they're all, say, het white guys. It might be equally weird if you have one each of some other flavor. Mix it up. And you don't have to put it on the page necessarily - especially if you're trying to tick your boxes for the reader - but be aware of that character's lens on the world.

Include those different people because they enrich the story and flesh out the worldbuilding. Think about what makes a fully realized world - do you have people of all ages and degrees of ability? Are there those in your world who have chronic diseases or disabilities? How does your world handle the nurture of children? Please don't just stick them back at the village with their mothers. Likewise, don't bury the disabled in their huts - they should be out living their lives, too. A lot of people fall somewhere on the spectrum between straight and gay, so flavors of bisexuality can be part of who a character is. Skin color is a descriptor, but making the choice whether that has political implications should be thought out and part of the worldbuilding.

See what I mean? It's a complex effort, sure, to incorporate greater representation in our books. It requires careful thought to move past our knee-jerk recapitulation of our own experiences.
It also requires the best of intentions - the authentic kind.