A Fantasy Book Rec: A Psalm of Storms and Silence! 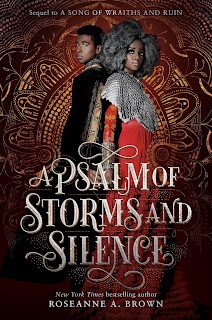 This week’s topic is one of my favorites: Book Recommendations!!!

As I’ve mentioned before, I love suggesting books and the book cover above is one that is waiting on my nightstand because book one was such a fantastic fantasy ride. And, the covers are absolutely gorgeous.

If you enjoy fantasy with strong characters and a dash of mythology and romance, you should check this series out!

A Psalm of Storms and Silence

A Song of Wraiths and Ruin #2

Karina lost everything after a violent coup left her without her kingdom or her throne. Now the most wanted person in Sonande, her only hope of reclaiming what is rightfully hers lies in a divine power hidden in the long-lost city of her ancestors.

Meanwhile, the resurrection of Karina’s sister has spiraled the world into chaos, with disaster after disaster threatening the hard-won peace Malik has found as Farid’s apprentice. When they discover that Karina herself is the key to restoring balance, Malik must use his magic to lure her back to their side. But how do you regain the trust of someone you once tried to kill?

As the fabric holding Sonande together begins to tear, Malik and Karina once again find themselves torn between their duties and their desires. And when the fate of everything hangs on a single, horrifying choice, they each must decide what they value most—a power that could transform the world, or a love that could transform their lives.

If you haven’t had the chance to check out book one, the blurb is:

A Song of Wraiths and Ruin 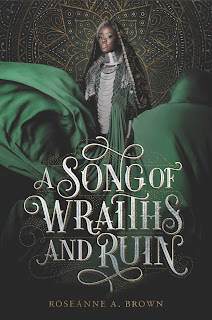 For Malik, the Solstasia festival is a chance to escape his war-stricken home and start a new life with his sisters in the prosperous desert city of Ziran. But when a vengeful spirit abducts Malik’s younger sister, Nadia, as payment into the city, Malik strikes a fatal deal—kill Karina, Crown Princess of Ziran, for Nadia’s freedom.

But Karina has deadly aspirations of her own. Her mother, the Sultana, has been assassinated; her court threatens mutiny; and Solstasia looms like a knife over her neck. Grief-stricken, Karina decides to resurrect her mother through ancient magic . . . requiring the beating heart of a king. And she knows just how to obtain one: by offering her hand in marriage to the victor of the Solstasia competition.

When Malik rigs his way into the contest, they are set on a course to destroy each other. But as attraction flares between them and ancient evils stir, will they be able to see their tasks to the death?

The first in an fantasy duology inspired by West African folklore in which a grieving crown princess and a desperate refugee find themselves on a collision course to murder each other despite their growing attraction.

You can find Roseanne online here.

If you haven't checked out this series yet, I hope you do! Happy reading!

Email ThisBlogThis!Share to TwitterShare to FacebookShare to Pinterest
Labels: A Psalm of Storms and Silence, A Song of Wraiths and Ruin, Alexia Chantel, book rec, Epic Fantasy, fantasy, Roseanne A. Brown