I'm tickled pink--no, not by the wintry blustery winds--to share the series finale of the Immortal Spy Urban Fantasy series with you! The seventh book marks the end of the adventures of Bix and the Berserkers in what has been a fun series to write. While I'm sad to say farewell to some of my favorite characters, I have to admit to feeling pretty gosh darn good about completing the series. So, without further ado, here it is, the last book: 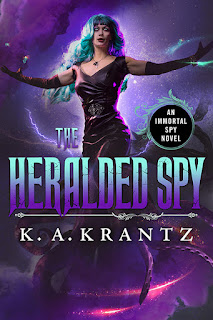 The heralds presage the arrival of unmitigated power.

War escalates in the Mid Worlds as the champion and caretakers fight to save their home from the onslaught of invading anti-gods. While the armies clash on battlefields, Bix targets the enemy’s leadership to negotiate their retreat for now and evermore.

Parley is the key to salvation, but the opposition refuses to answer the invitation. With her teammates abducted, her consort imprisoned, and the defense system sabotaged, Bix will finally claim every iota of her primordial magics to bring the enemy to heel…or to break them on the thorns of her wrath.

The heralds warn of fools who force the hand of the High Executioner.