Sounds close enough for me.

Jack had been at it a long time, of course, ever since Old Scratch had sent him on his way from the underworld with a single, burning ember of hellfire to light his way and keep him warm. That ember would never burn out, never become a faded ash.

That meant holding it someplace where it could not burn his flesh, or worse, still, his very soul. For that is what Hellfire burns and Jack had so many sins. Never meant for Heaven and not trusted to enter Hell, it was his lot to wander the world for all eternity. Cold and alone.

Thanks to he hellfire, not so cold.

Thanks to his own machinations, not so alone.

Every year there was one. Chosen on the Harvest Moon, offered to him in exchange for good fortune by the town of Summitville.

This year the offering was fair and sweet and would last better than the old turnips pr even the pumpkins he had used in the distant past.

The knife was sharp and thick, exactly what was needed. Jack drove the heavy blade into the top of his new lantern, feeling flesh part and bone crunch.

The souls of the dead he feasted on. They fed his hellfire ember.

The bodies hardly needed to go to waste, and so he made his lanterns of flesh these days.

The skull held up well and the flesh hardened when the heat of hell itself burned away the moisture.

Best of all, the hair made for a lovely handle.

The wet materials were easily removed. The knife carved away the eyes and the rest with ease.

Almost Halloween. Time for Trick-or-treaters and the veils between to worlds to thin out and allow easy travels.

One could almost get the impression I have Halloween on my mind. My next book release with a cover by the amazing Dan Brereton. 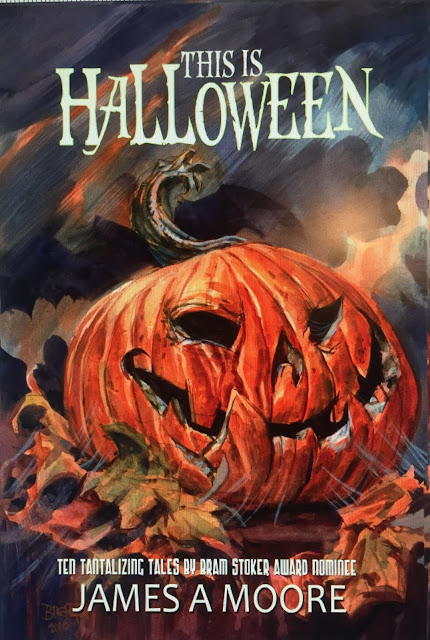