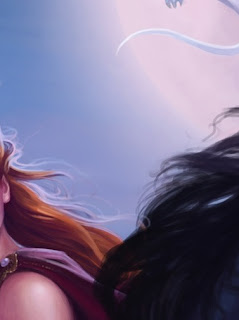 We have a cover for The Tides of Bára!!

It's so incredibly beautiful, I literally gasped out loud when I saw it. The incredibly talented Louisa Gallie knocked this one out of the park.

Want to see it? 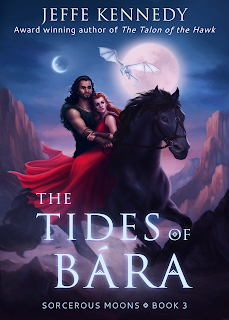 And, since I was supposed to write Autumn Equinox flash fiction today, and you all know how I feel about flash fiction....

Here's a snippet from the recently (like, last week) completed draft. Chuffta, Oria's small dragon Familiar, has turned out to be a bit of a firebug...


Closer by, Chuffta worked intently to drag what looked like a tree limb to a blazing bonfire. He had his wings spread and managed it by half-flying, half-hopping on one leg, and wrestling the thing with mouth, tail and the free foot.
“What are you doing?” she asked aloud, for Lonen’s benefit, though the words scraped her raw throat.
“I’m feeding the fire,” he chirped happily. “Keeping you warm!”
Lonen groaned. “Hey, man. Enough with the fire. You’ll roast us.”
“No?” Chuffta paused, releasing the limb with foot and mouth, but keeping his tail wrapped around it. He sounded terribly disappointed. He cocked his head at the fire. “Maybe just one more?”
“No more, please, Chuffta.” She rubbed at her gritty, sensitive eyes, though it only made them water more. She certainly wasn’t weeping. She blinked them open to find Lonen grinning and grimacing at once. “I don’t know what’s gotten into him,” she said, ducking her face so he wouldn’t see.
“I like fire! It’s hot.”
“His first time with fire?” Lonen suggested. “Other than your purple magic kind.”
“Could be.” She must have sounded dubious, because he shrugged.
“Some people are like that, obsessed with fire. Why not a derkesthai?”
“I’ve never played with fire before,” Chuffta confirmed. “It’s not like breath-flame, that runs out. As long as I keep putting wood, in there, it goes and goes.”


“You can build another one when we sleep tonight, how’s that?” she suggested. Chuffta grumbled, but agreed. He stayed by his fire, though, tail lovingly wrapped around the limb he’d wanted to add.


This will be out October 29, and the books in the series can be found here on Amazon, or here on my website. The preorder links will be up soon!