Flash Fiction: Baby, It's Not Cold Outside 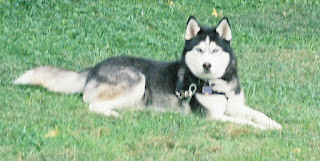 Instead, flowers had not only germinated, they'd begun to bloom.

The only seven inches he'd loll in this year was in his orthopedic bed. The canvas cover had worn to a softness that cradled his aching hips and shoulders. He winced as the degenerative disks in his lower back sent spasms down his left leg.

Next year then. Maybe next year he'd mush across fields blanketed in thick snow. The frigid winds ripping through his coat. The snowflakes clinging to his face, giving the world a lovely haze. The pure silence of a breathless wonderland waiting to echo his call. ...

Next year. Maybe. If the drugs kept the pain at bay. If the next stroke didn't take mobility from both legs. Maybe next year.

With a grunt and a grumble, the old husky shook in his harness and boots and went back inside.