What Got Left Out? Classic Misses in SFF Worldbuilding 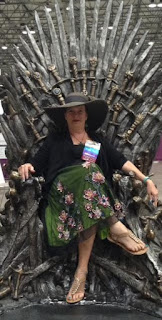 I love this photo of me on the Iron Throne, the much-sought seat in George R.R. Martin's A Game of Thrones and the ensuing books in the A Song of Ice and Fire series. It's a testament to GRRM's meticulous worldbuilding (yes, I'm making it one word in this post because it should be) that people have gone to such lengths to reconstruct pieces of his imaginary world.

That's our topic this week - Children and the Elderly: what elements tend to get left out of worldbuilding?

Worldbuilding is something we talk about a lot in science fiction and fantasy (SFF - like the SFF Seven!). Arguably all fiction engages in world-building to some extent - the author must establish a reality in which the story occurs. Even a contemporary story takes place in a world of the author's construction, because salient details are included and other, hopefully unimportant ones, are discarded. This fictional world is often intended to replicate a real one, but often keen readers familiar with the reality will pick out errors and misses.

With an entirely fictional world, the author "builds" it from the ground up. Or from the core of the planet up. Or the center of the galaxy and up. You get my meaning. Even with that, details have to get glossed over. With my Sorcerous Moons series, for example, I wanted it to be an entirely alternate world. So much so that it has two moons - and I did substantial research on how two moons would look, their effect on the tides, and so forth. What I did NOT do is create an entirely new ecology. The flora and fauna are decidedly Earthlike, including the humanoid life forms.

That's not only unlikely. It's pretty much impossible. And I don't justify it. (So far no one has asked me to.) I engaged in what we fondly call "hand-waving." Pay no attention to the man behind the curtain. Sometimes hand-waving is lazy writing. But often it's necessary because setting a story in an alien world where the flora and fauna - including the hero and heroine - come from an entirely different evolutionary chain would overpower it. It might be fun to do, but it wouldn't be the same story.

Any time I see a movie or read a book where the characters end up IN some author's fictional world, I want there to be huge gaps. Like no sewer system beneath the city streets. Or no day care for the infants of the tribe of male and female warriors who've all apparently gone to war. No fictional world is so complete and seamless that absolutely every detail is covered. Even GRRM, a master of the craft, has never explained the seasonality of the world in A Song of Ice and Fire. Winters and summers that last for years, okay, but what's the climate mechanism there?

GRRM pulls that off because that mechanism isn't key to understanding the thrust of the story. And, really, a great deal must be left out in creating fictional worlds and societies or it would be unreadable.

Still, it can be instructive to look at what does get left out. SFF worlds can be conspicuous in lacking people who are chronically ill or disabled. There's some classic hand-waving - they have advanced medicine so everyone is perfectly healthy! There might be purple aliens, but no variations in skin tone of the homogenously white people from Earth. Entire races seem to exist with no children - or none between infancy (the vulnerable babe-in-arms) and late teens. Even the Star Trek attempts to show children on the starships never had obnoxious toddlers throwing temper tantrums and getting into everything they shouldn't.

It's a fun game to play, for both writers and readers: What Got Left Out? Sometimes it's deliberate. Sometimes it shows an author's blind spot.

Anyone want to play?

Email ThisBlogThis!Share to TwitterShare to FacebookShare to Pinterest
Labels: Iron Throne, Jeffe Kennedy, What Got Left Out? Sorcerous Moons, worldbuilding