Once again, the challenge of writing AFTER Jeffe is the same. She's very good at covering topics.

World building is a BEAR. I mean that. It's a bear that refuses to be tamed and now and then it takes a bite to make sure you know who's in charge.

here's WHY it's a bear. Far too often I've seen writers throw their story aside for several thousand words at a time to drop roughly for trucks' worth of information at one time. Here's the shape of the closest city. These are the types of buildings. Here's the history of the Council of Wizards, complete with the painstaking methods they used to raise their tower above the city, one stone at a time. Each stone is a moment in time frozen in place, a historical note. Naturally, it's best to reflect on at least a hundred of those before we move on in the story.

Then, just for kicks, if we could describe the types of trees that are running near the river that runs to the west of the city versus the sort that are on the side of the lake to the north.

Now, of course, fashions. What are the paupers wearing? the assassins guild? The elves? The ogres from the bog down the way and how often to the ogres attack?

And then, the writer remembers that there's a guy on a horse (our main character) who has to go forward into the town and have an adventure.

That's the best way in the world to tick me off as a reader. The information is like peanut butter: better if you spread it around in a nice thin layer, rather than leaving one massive clump in the center of the bread.

How much detail to use?I'm with Jeffe. I like a lot of open spaces for interpretation. I never want to know exactly how many freckles there are on a character's shoulders and face. I don't need that much info.


Speaking of info: THIS is now available fro pre-order. BLOODSTAINED WONDERLAND is the sequel to BLOODSTAINED OZ. Order nbow if you are remotely interested as there are only 500 copies. 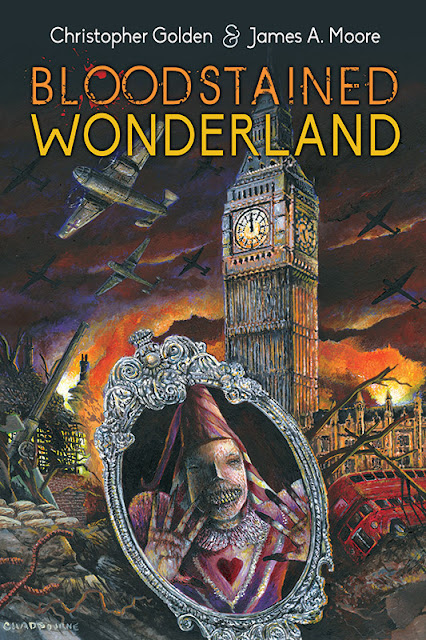