Big celebration day today as our Wednesday captain Linda Roberston releases the first book in her new urban fantasy series Immanence. Because Linda is such an amazing artist, she's written a musical score to accompany the book (sold separately via Linda's website). 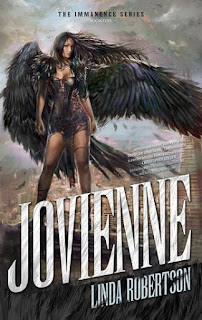 JOVIENNE
A horrific car accident put Jovienne in a coma. When she awakened months later, she was told that her family had died. And Jovienne? She felt different...irreversibly changed.

Years passed, and she was raised by a stranger who trained her to use the quintanumin. She excelled at every lesson, and she longed for her mentor to become much more. When the time came for her final test, a death-match against a demon, she uncovered a terrible truth: the man she had trusted to teach her had a dreadful secret, and Jovienne had become a monster's monster.

The traumatized Jovienne becomes desperate for a way out of this new life, working on a way to rescind her immortality. But this only brings the demons ever closer, one of which claims to know a secret of its own about Jovienne-a secret she doesn't even know herself...