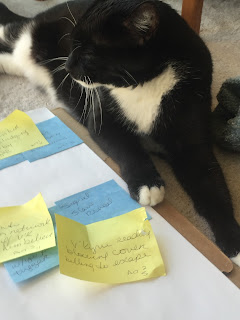 Remember junior high when you learned (vaguely) how to write a research paper? You were told to pick a subject, begin your research and keep your index cards organized so you could write your paper and cite your sources, right? For the first time, you were given more than a single evening to accomplish your task. Maybe a whole two weeks.

If you were anything like me, you spent the first week and a half playing with a million ideas about what to write. It finally took either panic or a parent hollering at you to just pick something to get you to actually do the paper. Which meant that you were forced to put aside any question of what idea was 'best'. Or even 'good'.

Books are a little like that. You can spend all your time figuring out whether an idea is any good for you or not. And I say 'for you' because I doubt there are any bad ideas - only ideas that land with the wrong person to execute. When a bright, shiny new idea sideswipes me, I do have a process for figuring out whether I can get it from 'oh hey!' to a finished novel. It looks a little like this:

1. Are there characters associated with the idea? If yes, proceed to 2. If no, this idea is DOA. I can jot it down and file it in case characters pop up later, but until there are people to drive the idea, no deal.
2. Do the characters have arcs? This is determined by a deep dive into character work. First stop: Break Into Fiction and the character templates. Why? Because I am entirely character driven. I must know the whys behind my people before I can reliably plot a story from idea to finish. If arc = yes, I can proceed to 3.
3. Proof of concept - write the proposal. Three chapters and a synopsis. This forces me to get clear on the GMC in a concise way. Usually. If that goes well and the characters are playing poorly with one another as they should, I can proceed to 4.
4. Scene by scene plotting. You know that's working when you have help like I did above. It's even better when your 'help' offers up editorial comment in the shape of fang holes in your scene notes.

A lot of work, maybe, but it has benefits. The first is that 90% of ideas get sorted within the first two steps. Those that don't have material progress already made on them. In rare cases, I've had ideas fizzle in the proof of concept stage. Those ideas aren't usually bad, per se, it's usually a case of having missed something vital in the character arc/motivation stage. Those get shelved to perk a little longer. Then I go back to revisit every once in a while to see if I can parse out what I got wrong.

At least no one wants me to cite my sources anymore.