Being a Career Writer: What to Focus On 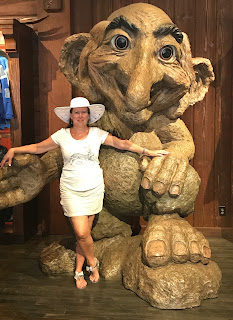 I dug out this photo from last summer - at Epcot Center after the RWA conference and me all shiny from winning the RITA® Award. Sometimes that still feels as fantastical as my troll friend here.

Our topic this week at the SFF Seven is one writing/publishing-related skill we want to learn/improve on this year. The writing/publishing conjunction struck me because - while I totally get that being a career writer involves both - those two aspects of being an author seem far more distant from each other than a slim slash mark would convey.

Okay, I started to write about something I saw an author tweet about the trials of self-publishing. Though I was paraphrasing, I ended up deleting because it felt unfair to call them out. But what I'm seeing is a LOT of discussion of the business of writing. That right-hand side of the slash mark. Marketing. How to get reviews. Amazon stripping reviews, stripping rank. Piracy. Best-selling rank. Marketing. Covers. How to reach readers. Marketing. Box sets. Series. Ideal release timing and spacing. Marketing.

You get my point.

So, I get that it's easier to focus on marketing. (Did I mention marketing?) There's a LOT of information out there on that stuff. In fact, many writers have gotten into the business in order to have something to market. (I've met these people. "I wanted to take advantage of Internet marketing and so I decided because romance novels sell, I'd write one and use that as my test product.) Also, the business side of the slash mark can feel much more controllable than the writing side.

This is what bothers me, however. For all the discussions I see about improving all the business end, I see maybe a tenth - if that - on improving the left hand side of the slash mark: the WRITING.

In point of fact, some self-publishing authors I know have said they don't care about improving their craft. The reasons vary, but some seem to feel it's beyond their control or irrelevant.

It's also the most difficult aspect of being a writer. Improving craft can be both humbling and infuriating. A writer has to set aside ego and take a good hard look at their work. They have to compare it to work by better writers and see where it falls short. And they have to be willing to listen to criticism without losing confidence. THEN they have to set to the frustrating and often daunting task of attempting to improve.

But I'm going to venture that, if you're losing readers instead of building an audience then the problem may not be with the marketing. We're in the weeding-out phase of the self-publishing boom now. Readers no longer have patience with giving books a whirl just because they're cheap or free. Or, rather, they'll give the author a chance, and if the quality isn't good, they won't try them again. I'm hearing this from many, many readers. This phase has been inevitable. The first week of the cruise is done and people have stuffed themselves with all the free food at the buffet. Now they're pickier, looking for the good stuff.

I should caveat that I'm picking on self-publishing here, because traditional publishing tends to force you to up your game to pass the various levels of tests involved in selling a work to them. However, with many editors in traditional publishing failing to give content edits, making our work the best it can be there, too, is critical.

So, what AM I wanting to improve this year? Craft! Each book is a master class in craft, meaning I learn something new with each one I write. Over the last couple of years, I've been working on my endings. I've been trying to give them as much heft and time as the beginnings - which isn't easy. I've improved, but I'm still not there. I also find I'm rarely satisfied with endings other authors write. I think this is partially why the cliff-hanger ending is so appealing. JUST DON'T EVEN TRY.