Why I'm Against Butt-in-Chair, Hands-on-Keyboard 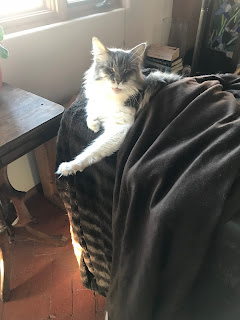 I caught Isabel mid-yawn on this one. What I get for disturbing the cozy winter's nap with my photo-taking. She - like all cats - is the poster child for this week's topic, which is balancing writing with physical and emotional health.

There's a catchphrase that writers like to pass around, about maintaining productivity: BICHOK, or Butt-in-Chair, Hands-on-Keyboard. I get that it's a metaphor, meaning that you get writing done by actually writing, but it's one I quibble with because I'm so against the sitting-down part.

Four FIVE! years ago (I just checked, wow) almost exactly, I invested in a treadmill desk. I'm now on my second treadmill - hydraulic desk is still going strong! - and I consider it the best investment I ever made. It takes a *long* time to really ramp up and get in shape for extended walking like this. Even if you think you're in great walking shape, this kind of conditioning takes a while to build as the steadiness and extended times are very different. In 2017, I walked 2,537 miles. A whole lot of that was while writing. I think this the best thing a writer can do for their health, full stop. The only downside is that now I really hate sitting and feel like I can't write as well sitting down.

As for emotional health, I'm blessed with happy chemistry, so I don't struggle with depression or anxiety as some do. I am always working on tweaking my process and work days to maximize productivity, however.

In 2016, I tried to do too much. It was my first year writing full time, and a few things happened. I started writing five days a week instead of six, which compressed that effort into the five days. This isn't a problem except that I really amped up my daily wordcount goals. I had some high wordcount months - in December 2015, I had my highest month ever at 75,000 words - but then I'd have crash periods that followed. The upshot is that my overall wordcount fell off considerably in 2016 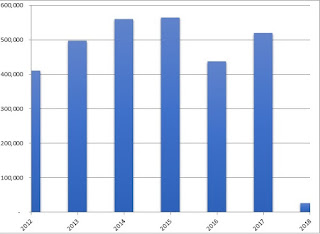 In 2017, I worked to remedy this by lowering my daily wordcount goals, but going for greater consistency. As you can see, 2017 words came up again nicely. For 2018, I'm trying to improve on that, and I'm trying something new: incorporating rest periods after finishing drafting a book.

I've found that I have a down cycle after I've finished the draft of a book. Even if I try to write something else, I don't make much progress on it and I get annoyed with myself. It finally occurred to me to try honoring that rest period - which I seem to take whether I plan on it or not - and program in the down time.

So, this week I turned in book two of The Lost Princess Chronicles, EXILE OF DASNARIA. (These titles may change - more on THAT later.) Because the holidays and the flu got me all off schedule, I worked Sunday, too, finishing late on Monday.

Tuesday, I took the day entirely off, cleaning the house and doing the laundry, de-Christmasing - all the stuff that I'd let pile up. Good purging. Wednesday, I caught up on business stuff, including stuff about the aforementioned title changes. I also dorked around and watched a lot of YouTube videos I don't normally allow myself to squander time on. Thursday I got another book into shape - which I'm 99% sure I'm calling SHOOTING STAR - and sent that to my freelance editor. That just took some tweaking, no real creative investment.

On Friday, I took my car to be washed and waxed - a time investment I rarely indulge in (and my car unfortunately shows it) - and then spent time showing out of town guests around Santa Fe. 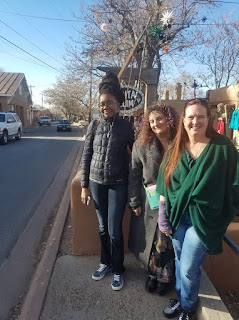 This is me up on Canyon Road with SFF editor Ellen Datlow and fantasy writer Nnedi Okorafor. Ellen is in town for this event at George R.R. Martin's Cocteau Theater. If you're in the neighborhood, you should come! And Nnedi is here to meet with George on her new project that HBO optioned from her book WHO FEARS DEATH and GRRM is executive producing. We had a great time lunching and shopping, which then extended into cocktails and dinner with GRRM and bunch of other folks working in SFF publishing and production.

So, it was a really lovely week. Monday I'll work on page proofs of PRINCESS OF DASNARIA (again, name change pending), which is another non-creative task. Then I'll spend a few days on a new project before launching next week into drafting a new novel. It's feeling like a good thing to do. I'm feeling remarkably relaxed and replete with time.

Also, my house is clean.