What a great way to welcome the new year by celebrating our Monday blogger James's latest release in his Tides of War epic fantasy series!  Congrats, James! 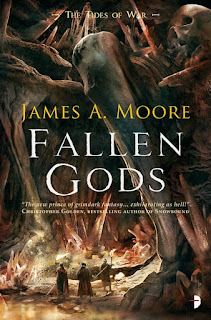 The gods are angry and only one man can fend off their apocalypse in the brutal sequel to The Last Sacrifice.

Brogan McTyre and his compatriots are wanted, dead or alive. Preferably alive, so they can be sacrificed to the raging gods. All they can do is hire more mercenaries and turn them into a fearsome army. But warriors aren't enough when the gods bring Armageddon to the world, unleashing storms and madness, and ceaseless attacks on Brogan's men by increasingly demonic foes.

Deep in the heart of the Broken Blades Mountains lies a sword containing the heart of a god slain in immortal combat, the one thing that might give Brogan an edge against the gods, but finding it isn't going to be easy...