The Unreliable Narrator - Love or Hate? 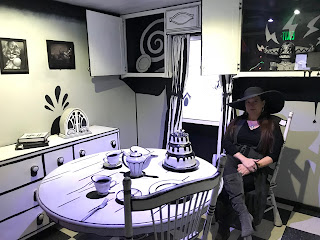 Another photo from Meow Wolf. Nnedi Okorafor and I fell in love with this crazy kitchen and had to photograph each other in it. One of the most fun aspects of this "immersive experience" is not only being able to touch and enter the exhibit, but in a way to become part of it as well. I felt like part of this kitchen and wanted to seem like it, too.

Art of all mediums is interesting in the way it interfaces with reality. It's impossible to recreate reality in art - and maybe not even desirable to do so - but art necessarily reflects and at best deepens our understanding of the real world. Our topic this week is the unreliable narrator - whether we love them, hate them, write them or avoid them.

An unreliable narrator is a point-of-view (POV) character - or characters who delude themselves in some way and thus misdirect the reader. They almost always occur in first-person or deep third-person POVs, though I've read one book where the omniscient narrator turned out at the very end to be deeply unreliable, making the reader realize the entire story was slanted - which was a terrific twist. Recent examples of unreliable narrators are the heroine of The Girl on the Train, who is drunk and emotionally traumatized, with memory gaps, or Gone Girl, where both POV characters are hiding who they really are and keeping secrets from the reader.

Me, I love an unreliable narrator. In fact, I'd make the case that all of my POV characters are unreliable, because I think human beings cannot escape being subjective about their experience in the world. There's no such thing as objective reality. A character will always interpret the world according to their own emotional landscape - which includes denial of some truths about themselves.

Reading a story with an unreliable narrator requires the reader pay close attention, because you can't just believe what the characters tell you. You have to be alert to subtle cues. I love reading an unreliable narrator in the same way I enjoy solving puzzles. I like writing them, too, though I've been sometimes accused of inconsistent characterization by those who don't understand that my characters are sometimes lying to themselves.

Now, a close friend of mine - and one of my critique partners - hates unreliable narrators. She wants to know what's real and what isn't, with very little tolerance for the gray areas.

What all do you think - love or hate an unreliable narrator? Any great examples?