Our topic this week is freeform – anything on our mind.

As in, I’m thinking about lots of things all the time, but nothing I want to write a post about, or which adds up to a post on its own.

I’m driving hard to finish my next Badari Warriors novel, TIMTUR, so maybe that’s part of why I’m coming up empty of BIG ISSUES I want to discuss in this space today. My brain is off into the far future, with my imperiled hero and heroine, fighting the alien scientists.

My toddler grandson has discovered a love for multisyllable words and gives them his all. Helicopter. Watermelon. Butterfly. He also loves his Gramma and has taken to asking for me. Fortunately I live literally at the other end of the same apartment complex and so I can walk down for frequent visits. There’s nothing as restorative as a hug from a little one. His favorite books are by Neil Gaiman (the 'Chu' series) and Sandra Boynton. Plus of course, the SPOT books...all of which I read for him with gusto and sound effects.

There are a plethora of things happening in the world on my mind. I tweeted last week that I’d realized the last time I knew so many members of Congress (from both parties) by sight who were not my own representatives was…during Watergate. I even recognize the Cabinet members and I don’t think that’s ever happened. Someone else agreed and said we both must watch too much MSNBC. Quite possible! But it’s not my nature and not my purpose in being on social media to discuss current events, with rare exceptions. Sit in my living room and we’ll hash it all out. Not here. Shrug. Your mileage may vary. I vote, I donate and I let my elected representatives know what I think.

My high school gym teacher passed away last week. She was a force of nature, kinda scary to an introverted-non-athletic-girl like me but inspirational in her way. And I’ll never forget the rousing, somewhat puzzling sex ed talks she delivered (“Gals, y’all gotta pump the BRAKES and it’s y’alls job to slow down those boys and their accelerators when they git you parkin’ on that dark mountain lookout some night after prom…” Slightly exaggerated for effect – I AM a romance novelist – but not much.)  I left home at the age of 19 to get married to my high school sweetie and live the entire continent away from the location of my high school, and only in the last year reconnected with my high school community on FB, so it’s still a little disconcerting to me when that part of the past reaches out and grabs my attention. That was a lonngggg time ago but they’re all locked in my head as they were when we roamed the school together, so it’s a surprise every time I realize hey, we’ve all gotten older. Kinda like the cast of “Grease”. Revelation: No one from our class is 17 anymore.

I baked banana bread this morning for my son-in-law, father of the aforementioned delightful toddler. Used my late mother’s recipe, which is older than I am, has probably too much sugar and butter but tastes great of course as a result. I’d written the recipe in what used to be my good handwriting on an index card and put it in the wooden recipe box my Dad gave me when I left home to be married.

There were various kerfluffles in the author world last week, some more hurtful to people than others. I usually miss hearing about these until they’re over and I almost never weigh in on them because most of the time I have no direct involvement. My eyes open wide and I blink a lot in disbelief as the tweets and posts go by in the social media stream and I might discuss aspects of it all privately with close author friends but that’s about it.

I watched a really unintentionally amusing scifi movie last night where at the one hour mark exactly the alien spaceship crashed in Laos (the first hour occurred in LA) and for the rest of the movie the hero and heroine battled it out against the aliens side by side with a group of Laotian drug smugglers who seemed to have dropped in from a kung fu movie of years past, on a set that looked like Angkor Wat but wasn’t. Turns out it was a direct sequel to another one I’d seen years ago which had ended with that movie's hero changed into one of the aliens and his pregnant girlfriend stuck on the spaceship high above LA.  The production values were actually pretty good, the hero was mildly hunky (terrific biceps) and I kept watching till the end, partly in disbelief and partly because the story moved along briskly. 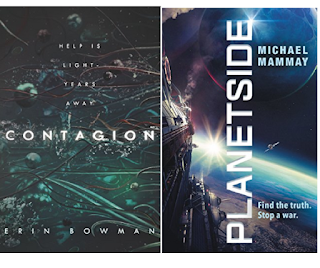 I read two great scifi novels in the last week or so – Contagion by Erin Bowman and Planetside by Michael Mammay, and interviewed both authors for AMAZING STORIES MAGAZINE blog. I did a long post for USA Today/HEA on mermaids, interviewing ten authors.

We’re in the middle of a series of 100 degree days (global warming anyone?) and although there are no brush fires near us this year, at least not right now, I’m keeping my eye on the news just in case.

So, ok there you go, my stream of consciousness “this is what’s on my mind today” post and now I have to get back to my characters and their dilemma. Have a great weekend!