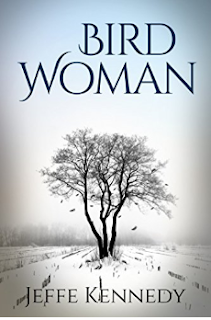 To close out our scary books week, I first have to say that I don’t read horror as a rule, or watch scary movies. As others have said, with my vivid imagination, the images and the scares stay in my brain wayyyy too long after I’ve finished the reading or watching experience.

I could give you a list of non-horror books that I found to be scary in other ways, on the topics of climate change, ebola-like viruses and the like, but that’s not really what we were going for with the theme, not in a week that included Halloween. (I wore a rainbow colored wig with a unicorn horn and purple ears BTW, to the delight of my toddler grandson….I also may have eaten a few too many Nestle Crunch bitesize bars…)

There is one scary book that always comes to my mind immediately when the topic arises and that would be Jeffe Kennedy’s Bird Woman. Here’s the very terse blurb: A psychological thriller set in the Pacific Northwest, the true story, told in essay form, of an encounter with the paranormal: a vengeful goddess in the Pacific Northwest.

It scared me to death when I first read it a number of years ago and I still remember it vividly. If you haven’t read it, go forth and do so!

I used to be able to read Stephen King and enjoyed his books quite a bit. Not all of them – some were totally not to my taste but for example, The Shining was one of my favorites. If I had to pick a second scariest book I ever read, it would probably be something by him, except I had to stop reading him years ago. I don’t know if he got even more ‘horrific’ in his writing or if I just got older and less able to shed the horror after reading it like most people do, but there was one novel of his (the title of which I’ve blocked from my brain frankly) where I spent an entire night having nightmares and couldn’t get his imagery out of my head. So I was done. Kudos to him for being such a powerful writer but I can’t even crack open any of his novels any more.

I do re-watch the TV movie version of “Langoliers” on occasion. For some reason I quite like that one…

Another book that stayed in my memory was Barbara Michaels’ The Crying Child. That one still gives me goosebumps. Not that she was writing horror, per se, but the power of some of the scenes really got to me. Ammie Come Home was another of her books that I read and re-read. She could spin a good tale with romance and an HEA, but scare me a bit in the process!

I think the common elements that scare me are a small group of people (maybe even just two people as with Jeffe's book), stuck in an isolated locale (islands seem to terrify me in this regard) and an eerie, threatening otherworldly presence bent on doing evil.

I don't write horror obviously but here's a snippet I shared last week for Halloween from one of my books, Mission to Mahjundar, where I took the Aztec god of death and adapted him to becoming an alien deity and then made my characters confront him. I'm pretty sure I wrote this particular sequence to get said deity off my mind because when I stood in front of a statue of him myself, in a museum in Mexico, the pure evil that radiated from that effigy was breathtaking. This scene is just the beginning of their encounters with the alien god... 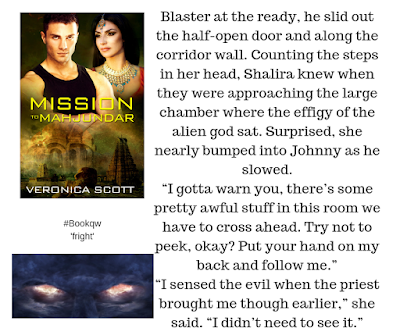