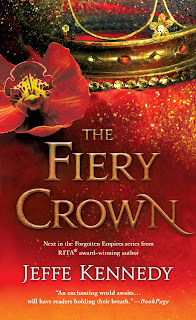 Our topic at the SFF Seven this week is... knitting? Did our calendar guru pick this for Mother's Day week, or is it a coincidence?

Anyway, it's not the knitting you think. (Or not the knitting *I* thought.) We're asking each other if we write scenes piece by piece and knit them together, or if we have ever had to knit-in scenes?

I am not a knitter. If I go for a textile metaphor, I'd say I'm a weaver. I line up all the threads, begin at one end with nothing but a lot of colors and textures, and then I weave them gradually into a tapestry. That said, I've occasionally had to weave scenes, themes, and clues into the finished story - which is probably what the topic poser is getting at here.

For example, for developmental edits on THE FIERY CROWN (out in only two weeks!! preorder now!! Eeee!!!), my editor Jennie Conway asked me to add in some scenes early in the book. She wanted to see some of the secondary characters sooner. She also wanted discussion of a later issue to happen sooner. So I ended up adding two scenes and fleshing out a couple of others.

The thing is, this isn't like patching a tire or splicing a soundbite into a podcast (which I've learned to do!). Nor is it like reworking some part of a painting. That's why I think of it as weaving. In order to add scenes and characters to an earlier point in the tapestry, I have to adjust the warp and weft before that to accommodate them. Then I have to alter the pattern of the threads thereafter, to keep the texture even and the pattern tight.

It was all for good reasons - and made for a better book - but yeah... I don't knit. Either in my writing or in real life!