My first book signing as at the RWA Nationals in Anaheim, in 2012. I was wide eyed and taking it all in. Our own wonderful Jeffe, who I met in person for the first time that year, gave me some really good tips, Carina Press took care of all of us authors - we had balloons! and special badge ribbons! - and I actually had a few fans of my books stop by the table. I even sold a few! One lady at the same table was a really famous author and had an assistant and a constant stream of readers who wanted to chat, have their picture taken with her, etc. It was a master class in graciousness as this author (whose name sadly escapes me) related to her fans. I was so impressed. The lady on the other side of me had like 125 books published by Harlequin and in between visits from her fans she explained a lot of the inner workings of HQN to me.

Later in the signing, when the crowd had thinned, I wandered around a bit and saw my favorite author in the world, Nalini Singh, sitting by herself at her signing table. Now, people, WHEN does that ever happen??? But alas, I was too shy to approach her.

Flash forward to this year and fortunately I'm a bit less wide eyed and shy and yes, I DID go talk to Nalini at the last two signings we were both at. She's a very sweet person and fun to talk with! 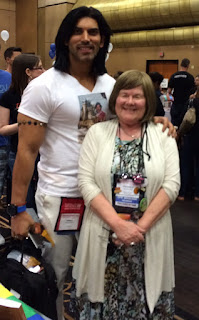 I had a terrific time at the RT convention in Las Vegas last month, signing books, meeting fans, meeting the outstanding cover model of my October '16 book, Vikkas Bhardwaj, who is a true gentleman. I sold more books than I ever have at a signing and I chatted up a storm with people passing by in the aisle as well as the authors around me. I used to work retail in housewares at the old May Company and I LOVE the whole process of talking to people, finding out what they like/enjoy/need/want. So when I'm not overwhelmed like I was at my first book signing, I do okay.

Lots of good tips given here all week by my fellow SFF7 authors. (We sound like super heroes with our new name, no??

I've done one reading, at Book'd in Burbank, which is a quarterly event created and run by Liz Donatelli, and that was fun. I consulted in advance with my audiobook narrator on which excerpt he thought I should do, and got some tips from him....it went well and several people told me they had no idea science fiction romance could be so much fun. (The book was Star Cruise: Marooned.)  Because this is a recurring event, it's very well attended, so perhaps 90-100 people in the audience. Not all of them were there for me, although they had to listen to me - the organizer usually has eight authors on the agenda each time. We weren't allowed to sell books at the event.

I've found that people don't touch the candy at signings. I've tried Hershey's kisses, mummy-shaped lollipops, and chocolate balls wrapped like miniature planets. I won't bother taking candy again. (I must admit I tend to eat it while I sit there.) 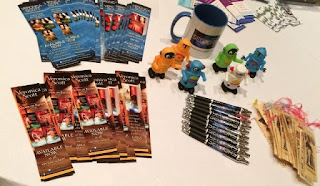 People like ink pens, genuine Egyptian papyrus bookmarks (because I usually have one SFR and one ancient Egyptian novel to sell at each signing) and the real bookmarks, with my series info on them.

I've also tried stickers (thumbs down) and small King Tut pins, which people did like for their badges but I was such a newb I didn't have anything on them to identify them with me and my books. Live and learn! I would do pins again, with some clever saying or a tag line from the books and my name and/or url on them.

I also had some fun little robot toys this year and those went like hot cakes, plus I used them in promo for the various events I was at during the convention, by tweeting photos of them in action.

Bottom line - just be yourself and be genuinely interested in the people around you, whether it's a crowd or one person, and HAVE FUN. 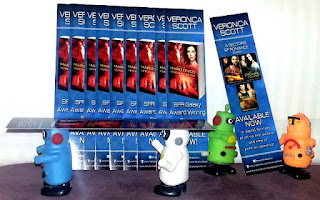