It's our first Big Release Day on our new ship The SFF Seven!  ~swings the champagne~ Join us in celebrating not one but TWO books hitting the market today for our Sunday Captain, Jeffe Kennedy.

First up, a new fantasy romance series in the world of the Twelve Kingdoms: 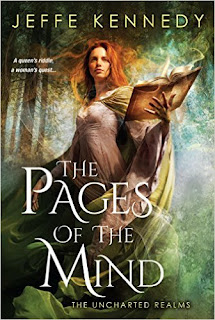 PAGES OF THE MIND (THE UNCHARTED REALMS)

Magic has broken free over the Twelve Kingdoms. The population is beset by shapeshifters and portents, landscapes that migrate, uncanny allies who are not quite human…and enemies eager to take advantage of the chaos.

Dafne Mailloux is no adventurer--she's a librarian. But the High Queen trusts Dafne's ability with languages, her way of winnowing the useful facts from a dusty scroll, and even more important, the subtlety and guile that three decades under the thumb of a tyrant taught her.

Dafne never thought to need those skills again. But she accepts her duty. Until her journey drops her into the arms of a barbarian king. He speaks no tongue she knows but that of power, yet he recognizes his captive as a valuable pawn. Dafne must submit to a wedding of alliance, becoming a prisoner-queen in a court she does not understand. If she is to save herself and her country, she will have to learn to read the heart of a wild stranger. And there are more secrets written there than even Dafne could suspect…


Then, because she's shooting for the stars, Jeffe is releasing a second book--a short story that takes place in the world of the Twelve Kingdoms--in a fantasy romance double shot with author Grace Draven. Think of this novella as a bridging story between TALON OF THE HAWK and PAGES OF THE MIND.


FOR CROWN AND KINGDOM 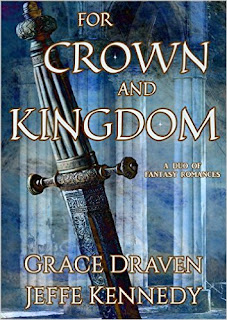 The Crown of the Queen: a novella of the Twelve Kingdoms by Jeffe Kennedy

It's been a lifetime since librarian Dafne Mailloux saw the coronation of the tyrant who destroyed her family. She did her part to pull him off the High Throne. But his daughter, the would-be Queen, and her sisters must still tame their conquest. If her victory is to last, Dafne must forge peace with the subtle, ruthless methods of a diplomat--and the worst memories of her life...

The Undying King by Grace Draven

The stories are told in whispers, even after so long: of a man whose fair rule soured when he attained eternal youth. Imprisoned by a sorceress wife in a city out of time and place, he has passed into legend. Few believe in him, and fewer would set their hopes on his mercy. But Imogen has no choice. To break the curse that's isolated her since birth, she'll find the Undying King--and answer his secrets with her own...


BUY IT NOW on Amazon