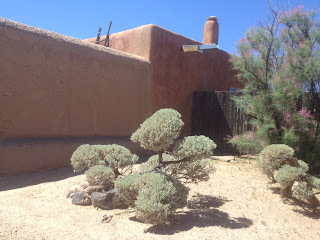 I got to go on  a tour yesterday of Georgia O'Keeffe's winter home and studio in Abiquiu. That's been on my list for a while now and - wow! - it was totally worth it. I love studying how other artists live and it turns out that she and I share many aesthetics. No surprise as I love her work. Also no surprise that she's more visually oriented than I am. My sister-in-law who's a painter asked me if I got any "vibes" from the place. Yes. Yes, I did. Her powerful personality haunts that space and they've kept it exactly as the day she left. Remarkable experience.

This week on the SFF7 wonder blog, we're discussing catering to younger generation – what words and ideas have we given up because younger readers won’t know them. This is my topic, so I'll kick it off with a few stories for why this has been on my mind.

A while back I saw a young agent tweet that an author used "cool beans" in a manuscript they'd sent her and she was embarrassed for them. There's a few things to unpack here, so I'll take them methodically.


A long time ago, back in the early 80s, the board game Trivial Pursuit came out. My family loved to play this game. I only discovered much later that not every family had the rule that if you'd answered the question in a previous game, you were on your honor to cop to it and draw another question. We viewed it as a test of knowledge. I often complained that many of the entertainment questions were biased for the older generation. In fact, I had a rule of thumb that if I didn't know the actress in question, I'd say "Carole Lombard." For an actor, I'd say Clark Gable. It was like guessing B on a multiple choice test - the odds were in favor of it.

I've saved this thing for a while from an article in Vanity Fair. The article itself isn't that relevant, as it's dated now, unless you're big into Ryan Gosling history. But this bit caught my eye:


“I think it really is sort of like, I’m a pigeon and the Internet is Fabio and it just happened,” Gosling said to The Hollywood Reporter, attempting to explain the pop-culture phenomenon via obscure Fabio reference.

Bolding there is mine. I saw that and wondered, since when is a Fabio reference obscure? I mean, yeah, enough of bringing up Fabio in Every Single Article that References Romance, but obscure? This kind of thing is much like snarky agent's tweet above - it reflects the author's narrow view of the world more than anything else.

There are those (who consider themselves purists or arbiters of culture) who say pop references should never be used as they'll date a work to that era. This might be true on some things (hello Ryan Gosling taking a break from acting), but others persist and become emblematic, even iconic (hello Carole Lombard).

What's interesting to me is when pop culture references become so embedded in our lexicon that we later have to dig to retrace their origins. Good examples are Jump the Shark (from the TV show Happy Days, when Fonzie went, of all things, waterskiing in Hawaii and ended up literally jumping over a shark - now a metaphor for any show that takes the plot in an improbable direction) or Cut to the Chase (originally film director's jargon for cutting to the chase scene whenever the movie momentum lagged, now shorthand for getting to the essence of something).

So... how's a writer to know? When does cool become square, and sick become, well, sick?

I'm interested to hear what my superhero SFF7 fellows have to say on their personal rules of them. For me? Well, frankly my dears, I use whatever the hell I want to.