﻿
For my cover translation flash fiction, I have the great good fortune of pulling Veronica Scott's cover for LADY OF THE STAR WIND 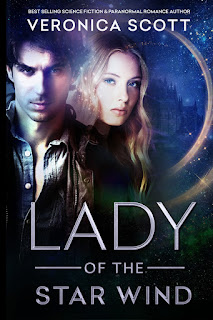 Someone groaned. His vocal chords burned, leading him to believe he'd uttered the sound. Good sign. He wasn't sucking vacuum. Yet. Forcing his eyes open cost him what felt like a laser cannon blast to the head, but when his vision twisted into focus, the worst of the pain retreated to a sullen, persistent thump in his left temple.

Blue-gray bulkheads surrounded him. Centuries of space travel and no one had found a way to create space-worthy building materials in anything other than grim. The depressing bit was that it wasn't his grim, blue-gray bulkheads.

He shook off his body's interest. More pressing concerns. "Where am I?"

"Aboard the cruiser Star Wind."

"Star Wind. Solar wind," he said. What the hell had happened to his brain that he tripped over translating a poetic ship's name?

Focusing on the weapons strapped to her waist, he said, "A destructive force of nature."

"Unless you're armored." She looked him up a down, brows slanted in amusement. "Very few are."

Star Wind. Destructive. He frowned. "My patrol skiff was under attack."

"Of course I did," she crooned. "Because the great big payday tucked away in the piece of space debris you patrol goons were guarding isn't the least bit necessary to keep the Star Wind competitive in this cruel universe."

He clenched his fists. "Pirates."

She snorted and straightened. Stepping back, she tapped the doorframe. The distortion of a force field splintered her features. But not her words laced with bloodthirsty amusement. "Oh no captain. We don't take prisoners. We procure entertainment."