Motivated by the positive

When I read the topic this week – writing quotes that are inspirational or motivational – at first all I could think about was that Steven Wright quote: “I’m writing a book. I've got the page numbers done.” Which, you know, isn’t extremely motivational. (Even it is so true.)

Then I thought about Dr Seuss. If Seuss isn’t a kick in the hiney, I don’t know who is. So I read through Oh the Places You’ll Go and … it was actually a bit of a downer. Every time he builds up to a “yeah, you rock, kid,” he follows on immediately with, “except, no. Just kidding.” I think the thing we’re supposed to take from the book, overall, is that life ain’t easy, but it’s worth it? Or something like that?

I’d like to be the sort of person who stubbornly, spectacularly defies criticism, is fueled by rejection, who gets knocked down but then gets up again, just like in that song (which may now be in your head for the rest of the day; sorry). But I’m not that person. Negative sucks the motivation right out of me and leaves me a pile of donut-eating who-even-cares.

So, what does work?

I’ll be honest, I don’t have a wall-sticker over my desk that motivates me, and I’m not huge on personal goal-making and aiming for the bleachers and peppy stuff like that. What I do have is a file folder with a bunch of emails and screenshots in it. In those files are comments from contest judges, critique partners, agents and editors who rejected my work kindly and had nice things to say, agents and editors who didn’t reject and also had nice things to say, professional reviewers and all their pretty stars, readers who were entertained enough to tell me about it … basically, a bright, blooming collage of positivity.

This is my go-to treasure box when my self-confidence gets low. I can pull out these priceless words, read them, and think, hey, maybe I don’t suck. Maybe this adventure is worth it. Maybe someone, someday will want to read this steaming pile of work-in-progress. That person might even like it. Might even like it so much that they sit down and type out a note to me, letting me know the pile isn’t quite so steamy. Or at least the in-a-good-way kind of steamy.

I guess that’s it for me, then. The good. I celebrate all the good, even several times, because once is never enough. Every nice word, I tuck it safe in my file folder of happiness, and it motivates me for days, weeks, years, always.

In other words, if you’ve taken the time to send an email or to leave a review or to contact me at all, Thank You. You have no idea what your gift has meant to me. 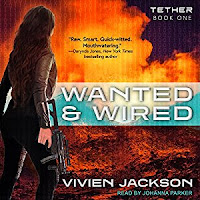 p.s. - This has nothing to do with the topic, but a super cool thing happened yesterday and I am celebrating -- BECAUSE WE MUST CELEBRATE ALL THE THINGS: my debut book, Wanted and Wired, was released as an audiobook. The narrator, Johanna Parker, performed the Sookie Stackhouse books and is so amazingly talented. I've grabbed a copy and can't wait to see what Ms Parker has done with the interpretation.