A Better Answer to: Where Do You Get Your Ideas? 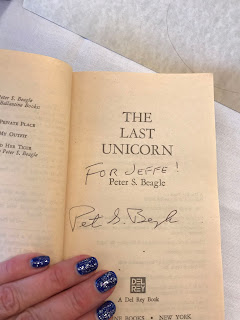 Last week I attended SFWA's Nebula Conference and got to meet our 2018 Grandmaster, Peter S. Beagle. I legit teared up when we talked and he signed my battered old copy I received forever and a day ago. I felt like a teenager again and all those feelings that led into my early love of fantasy rose up and swamped me.

The conference in 2019 will be at the Marriott Warner Center in Los Angeles. I highly recommend it! It's become my absolute favorite gathering of SFF writers and industry professionals.

Our topic this week at the SFF Seven is "Where do you get your ideas - the least popular question ever."

Whoever suggested this topic added the subtitle because a) writers get asked this question a LOT, and b) it's really hard to answer. One reason is because we don't actually KNOW where we get our ideas. We often laugh off answering it, or glibly say something like "Getting the ideas is easy; it's having the time to write them that's the challenge."

Which is a really terrible way to answer an earnest question. People who ask this get nothing from us assuring them that ideas are common as grass. They want to know where we get GOOD ideas. How to know which ideas to run with. What story to tell when they're looking at a blank page or screen. They also want to know how they can get an idea like Twilight, or Harry Potter, or Hunger Games.

I recently listened to an interview with Neil Gaiman where he talked about this very thing. (Yeah, it's a few years old. So what? The internet lives forever!) He was asked to talk to a group of schoolchildren and one asked this question. And Gaiman said it occurred to him that it wouldn't be fair to give them the usual non-answer, because kids deserve better than that. Really, anyone who asks this question deserves better than that.

I pay attention to my dreams and write them down. If there's an image/feeling powerful enough that I remember it clearly when I wake, I know there's something to it. THE MARK OF THE TALA, the first in my Twelve Kingdoms/Uncharted Realms series started with a dream. So did ROGUE'S PAWN from my Covenant of Thorns trilogy.

I get a lot of ideas from reading other people's books. No, it's not plagiarism if someone inspires you. I once heard a Famous Author on a panel proclaim that she doesn't read. (She called it a dirty, little secret of authors and seemed to think others thought the same way. Spoiler: we don't.) She believed reading somehow spoiled her own creativity. In the bar after (where all the best writer conversations occur), another author said "We're rich because we steal from the best houses." And, no, it's not really stealing. Art inspires art. Good books - and great movies - suggest ideas to me all the time. Don't go and replicate someone else's plot, but if something inspires you, run with it!

As much as we may riff that we get ideas all the time, most writers are always looking for new and better ones. They may be common as grass, but there's a lot of grass out there. We're all looking for something more special than that. Don't let any writer convince you otherwise.