The Return of the Bug-Eyed Monster 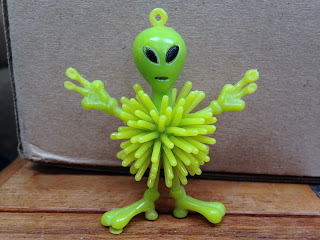 Are any of you old enough to remember when aliens *weren't* cute-ish and semi-benevolent?

SF in particular has been through a couple of stages, all of which reflect the fears of the era each of them represents.
There are nuances and shadings to all of them, of course, but if the purpose of science fiction is to mirror the hopes and especially the fears of humanity, I suspect we can extrapolate the future of the genre from it.

Given the issues facing humanity as a whole - the rise of nationalism and the associated cruelty and violence, climate issues and the precipice humanity is fast approaching - we have a lot to process as a collective consciousness.

So yes. I expect more dystopian (think Fallout 4). I expect more utopian - and by utopian, I mean the stories people tell from the depths of their faith in humanity (Star Trek at its most idealistic.) I expect angry, murderous armies of aliens swarming humanity where ever we can be found. I expect stories of small bands facing overwhelming odds. Sure. I figure we'll all be slaying our Nazis in whatever cathartic form makes us froth in glee.

I'd like to think I'm seeing a glimmer of resurgence in interest in actual science. I'd like to think. If that's real, I'd expect to start seeing more stories about how science saves the not just the day  and our intrepid band of cyborg warriors, but the entire world (which is *kinda* what SF is supposed to be - science saving or destroying the day, but I digress and it's possible that's far too narrow a definition of an entire genre.)

Personally, I long for the stories of oppressed populations (human, nonhuman, cyborgs, robots, aliens, what have you) using the power of science and intellect to throw off chains - whether those chains are physical, emotional, mental, or environmental. Rising by the power of thought rather than sheer physical might (though there's fun in that, too) feels super empowering to me. Even though I be no great wit. :) I'm certainly no great physical power, either, so maybe there's that.

Where will the genre go? Where ever our fears and our hopes and our dreams as a species go, that's where.