Our topic at the SFF Seven this week is "What trope/theme did you think (or wished) had "died" only to recently reappear?"

From Wikipedia: The word trope has also come to be used for describing commonly recurring literary and rhetorical devices, motifs or clichés in creative works.

So here’s the thing – I don’t think in tropes. I don’t pay attention to them, I don’t read for them or despite them. When I saw this topic of the week, I thought of a See’s Candy Shop, with all the flavors and varieties. (Alas for the good old pre-pandemic days when their stores were open.) I know which ones I like, I usually order the same ones (dark chocolate vanilla buttercream is my favorite, followed closely by dark chocolate butters and many more…) but occasionally I’ll try a new one, which is how I discovered my love for raspberry truffles. I don’t even glance at the flavors I don’t like and I politely refuse a free sample if those are the ones on offer. I’m perfectly happy for the other flavors to exist, for whoever enjoys them, but they’re not on my list.

True story: when I was in college, I worked for the May Company as a housewares department manager, I used to stroll down the mall on my dinner break and have See’s candy. Now I’m not saying I did this every day, but I did it often. This became a problem when my husband came to keep me company for dinner one evening and suggested as a treat we get some See’s. Uh oh. The clerk greeted me enthusiastically and put my usual order into a bag without my ever opening my mouth! Busted! My spouse was concerned for my health more than anything else and we laughed about it later but I guess I might have overdone my “dinner at See’s” routine a bit.

Yes, I know I digressed but See’s candy….yum.

One of my favorite web sites is TV Tropes, “The All Devouring Pop-Culture Wiki”, which despite the name does cover other areas than just television. You can browse, search, look at the indices and otherwise roam this site for far too long, finding fun examples of every trope under the sun. I picked a few at random from the “Overused Sci-Fi Plot Devices” list, which is extensive:

(I think I’ve seen every one of those on a Star Trek episode!)

Some of the entries on the list have links to other essays and there are folders of examples in every field from anime to music to toys live action films.

In my own writing I have certain tropes I go to just about every time and here are some examples – the weary but deadly Special Forces soldier, the high powered business woman, the Ancient Aliens, the extremely dangerous or catastrophic situation (Wreck of the Nebula Dream, my first published science fiction romance contains a number of these tropes of mine), a dream space or alternate form of reality where the characters can connect, maybe a pet, sometimes a child, an interstellar crime syndicate,  the evil implacable alien forces, a benevolent galactic civilization with bureaucracy, Artificial Intelligences, true love, a Happy ending (whether For Now or Ever After)… 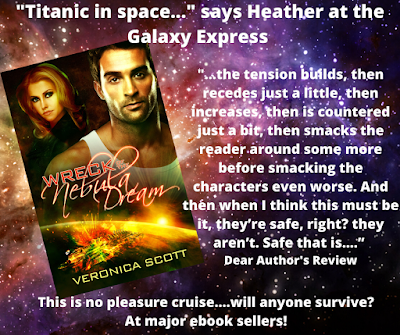 But the thing is, this is the type of book I enjoy reading myself and therefore the kind of book I want to WRITE. And I’m blessed to have readers who enjoy the same ingredients.

The key is to tell a good story each time out, to mix and match elements – maybe this time the weary soldier is a kickass woman or the ancient alien is a tree, who absorbs the characters to talk to them – and be sure to tell an exciting tale.

I also keep my eye out for new concepts to work into the stories. Some of my most novel plot elements have come from reading articles in business magazines. Refresh a trope with a new take! 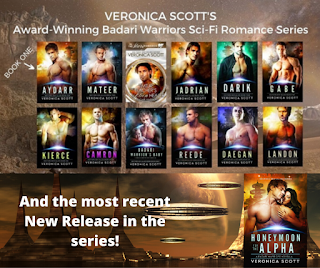 My Badari Warriors series is at thirteen books and going strong. The basic trope is the same in every one, since the novels are about genetically engineered soldiers of the far future, fighting alien scientists for the right to live and to love. They each find their fated mate in the course of the book’s events and together the couple battles the enemy. The key, however, is that each time I consciously challenge myself to find new elements and new ideas to differentiate the plots, and of course the characters in each book are different people, each with their own characteristics, background and likes/dislikes. So far the readers seem to find the books satisfactory.

Going back to my See’s Candy analogy, their recipes use the same ingredients – chocolate, sugar, cream, butter, flavorings, nuts – to create that entire store full of delightful delectable different offerings. Tropes are the same – ingredients that can add up to an infinite number of stories and there will never be enough time in the world to read them all.

Stay safe, sending best wishes to you and your loved ones for good health in these stressful times! Happy reading…