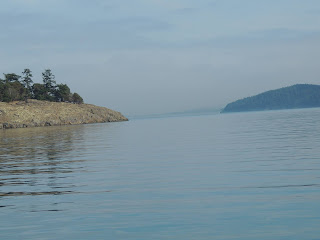 Like the sea after a storm. Except in no way does our sea look like this. Not yet. It may take a few days.

We were in Eta's path Wednesday. Eta came in as a category one hurricane and deteriorated to a tropical storm pretty quickly, but it made for one heck of an exciting day. Rain. So much rain. Wind, of course. Driving the rain against the south side of the house until Eta moved on past us. Then the wind shifted around to the west.

The exciting part - and I mean exciting in that 'let's not do this ever again' kind of way - was every cell phone in the house blaring alarms for the copious tornado watches we had.

Tornado warnings are first and go up for conditions that favor the formation of tornadoes. Tornado watches are second. They're the ones that alert out via emergency notification systems. When there's a watch, there's rotation in the clouds. That doesn't always mean a tornado on the ground, but it certainly means you turn on the news and watch the track of the cell that's been marked. If it heads your way, you take shelter.

Once the tornado watches and warnings stopped coming in, flood watches took over blowing up our phones. All night long. We're up high enough that we don't need to worry about the two resident gators in the backyard pond coming to dinner.

What we had to worry about was that big south wind blowing all that water against the house.

This morning, my bedroom floor is wrecked. Someone with very little foresight put laminate flooring in this house before we bought it. It's a kind that swells up and delaminates the instant it gets wet. This is Florida. EVERYTHING gets wet. And in this case, the storm found a way to drive water into hairline cracks in the masonry and ruin the floor.

Hooray, insurance adjusters are in my future.

We're lucky. We have only minor annoyance damage. At least one person was killed during the storm when the water rose enough in his house that it touched a live electrical wire. The person was electrocuted. I'll be filing that under things I never thought about happening with a hurricane/tropical storm. It never occurred to me.

I know I was supposed to write about agents. So here's my advice: Do you want to be traditionally published? Get an agent. Just know that traditional publishing is slow. A great agent today may turn out to be the wrong agent tomorrow. Ask me how I know. On the plus side, an agent gets your work directly in front of an editor who would otherwise use your MS as a door stop. Do you want to write fast and run your own business? An agent probably isn't in your best interest. Indie publishing is something you do at your own pace. You have control of everything. The cons to going it on your own are that you go at your own pace and you control everything. If you're deadline driven, get an agent. If you're self motivated, consider skipping the agent and building your empire in your own image.

No matter which way you go, remember: There are no 'right' answers, only right for you answers. Also, back up your work.