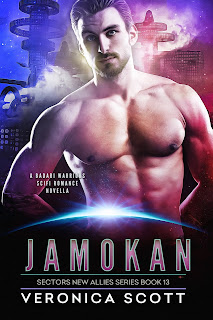 This week at the SFF Seven, we're sharing a snippet from a work in progress. I’ve been working – slooooowly – on my next Badari Warriors book, JAMOKAN. Everything going on with the pandemic and politics this year had made it hard for me to feel energized and creative (plus I’ve had several chronic health issues flare up recently). I actually have gotten six books out this year, much to my own amazement. Originally I thought JAMOKAN was going to be a novella but of course the characters thought otherwise and I’m over 50K with some major scenes still to be written.

I haven’t written the blurb for the book yet because one challenge at a time, you know? Here’s the series blurb: Genetically engineered soldiers of the far future, the Badari were created by alien enemies to fight humans. But then the scientists kidnapped an entire human colony from the Sectors to use as subjects in twisted experiments…the Badari and the humans made common cause, rebelled and escaped the labs. Now they live side by side in a sanctuary valley protected by a powerful Artificial Intelligence, and wage unceasing war on the aliens. Some overarching issues do remain unresolved in each book since this is an ongoing series but romance always wins the day in my novels!

Jamokan is the Alpha of one of the packs and feeling frustrated with his role in the rebellion and in the sanctuary valley. In this unedited scene from near the beginning of the novel, he’s asking Aydarr, the ruling Alpha for permission to take his men to the mountains for a hunt.

EXCERPT: Two days later he sat with Aydarr in the other Alpha’s office, drinking Badari herbal tea and discussing a training issue. It was a rare meeting with neither Jill nor Daegan in attendance and Jamokan knew this was his opportunity to make the proposal he’d been mulling over. “There is one more thing,” he said once they agreed on the resolution of the training curriculum.

Eyebrows raised, Aydarr watched him. “Yes? I know you’ve had something weighing on your mind for a while now. I know you too well after all those years of rivalry in the lab. I used to have to watch you like the alien cat in my DNA would stalk small winged prey. I never knew what you’d pull next and I always had to be prepared.”

The Alpha’s tone was complimentary, admiring even and Jamokan was mollified to some extent.  Yes, before Jill came onto the scene there had been strong competition between them and Jamokan won his share of the contests. He stopped himself before wondering for the thousandth time what would have happened if the Khagrish had given Jill to him instead of Aydarr. She isn’t my fated mate, which is the will of the goddess, so we’ll never truly know. “I need to pull my pack together and take the men out of this damn valley for a bit. The pack bond is… fraying.” He searched for the right words. “Not to the point where it would ever break of course.” A flare of dominance prickled through his nerve endings at the mere idea of his pack dissolving. “I wouldn’t permit that. I can hold a pack together. But maybe it’s our special canid mix of DNA – we need to run as a pack. Just us. Take a breather from all this forced togetherness in the valley and undertake a task or mission on our own.”

“I think the Khagrish unfortunately had some sense built into their so-called science,” Aydarr said, unperturbed. “I think all three of our packs needed that time loose in the Preserve which we were given between experiments. To just be ourselves, as much as we could be under the circumstances. To not interact with the other two packs for an extended period.”

Thinking back to the time in the labs, Jamokan said, “I wonder how the Tzibir are faring these days? Collaborating with the Khagrish even to a limited extent seems like a slippery slope to extinction.”

“You hear the same reports I do from MARL,” Aydarr said with a shrug. “Nothing about them on any of the intercepts. As long as the damn lizards aren’t taking the field against us, I have other worries to deal with than a group who chose not to join us. What kind of sortie do you have in mind for your pack? Now isn’t a bad time actually.”

Jamokan had come prepared. “I understand the kitchen is running low on protein stocks, since we added the last group of people. I was thinking the pack and I could go up north, to where the giant horned faleker roam, and do a few weeks of serious hunting. Maybe bag game birds as well. Darik said when he was on his solo mission to the north he saw flocks of thousands of birds on the lakes near the falekers’ habitat. My enforcers and I could design a few simulated maneuvers to run as well, sharpen everyone’s senses. Maybe offer a prize to the winning team or soldier. I have to think through the details, once I know for sure where we’re going.” He tilted his head ever so slightly, knowing he needed to signal his willingness to accept Aydarr’s decision. The other Alpha’s strength pushed against his own and of course Aydarr would win. Jamokan always had to be mindful to steer clear of confrontation with the man, which chafed. In the old days, in captivity, he and Aydarr squared off fairly often. “Assuming you give permission.”

The supreme Alpha lounged in his chair, considering…

I hope to get the book finished, edited and released in December….till then feel free to catch up on the rest of the series, if you haven't already! At all major ebook sellers... 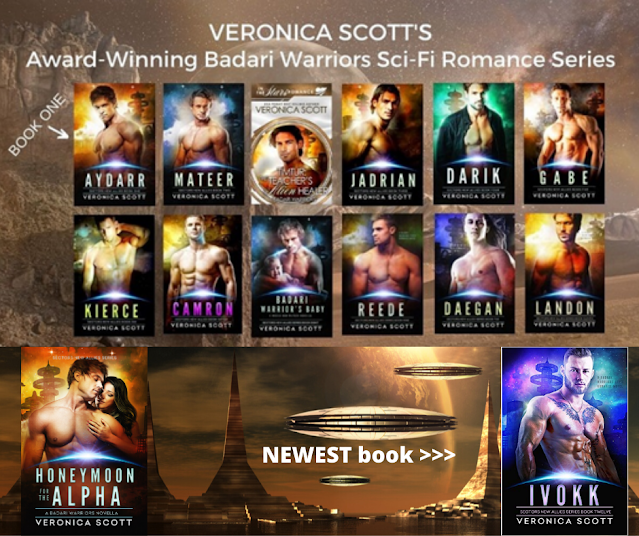