The Tourists Guide To Haunted Wellman

As Jeffe pointed out, this week we're supposed to tease a forthcoming project. Well, I've got several of those going and I like to tease, s here's the first part of THE HOURISTS GUIDE TO HAUNTED WELLMAN.

For the many who do not know, Wellman is a fictitious town in Georgia, created by Charles R. Rutledge and yours truly.

This book is a blend of ghost guide and ghost stories. Here's a bit of both.  IN thepry this book will be out in time for Halloween of 2021.

The Tourists Guide to Haunted Wellman

Brennert County, Georgia is a beautiful place. Nestled in the north Georgia mountains, and only a little over an hour and a half away from Atlanta (depending on traffic, of course) the buildings in the area are a collection of traditional southern homes and a few surprises. The area has been lived in for years, and the history is rich with tales of heroism and villainy alike. During the Civil War there were plenty of those tales to be told, and exactly who the bad guys were was often a matter of perspective.

Looking at the homes, at the landmarks, and at the lush green hills, you’d think that Brennert County, and towns like Wellman, were just about postcard perfect. But as is often the case in the south, there are things not mentioned, places not spoken of in polite society, that hold dark and sometimes even dangerous secrets.

Wellman, Georgia and the surrounding areas are steeped in a history of violence, madness, and murder. There are tragedies aplenty to go with the local legends of goblins, like the Moon-Eyes, and the tales of witches buried in the Hollow, or living in the places where the sun almost never shows itself. There are rumors of runaway slaves who got themselves lost in the mountains and had to deal with demons in order to survive. Wellman is a place where families have kept themselves for close to two hundred years, never leaving once they found the places that felt like home to them. What could be better? What could possibly go wrong?

Read carefully and you’ll learn of love lost, of murder most foul, of people hanged for crimes they did not commit and young lovers who died trying to save each other. Take the time to study this book and you’ll discover where a man buried his own family in the walls, along with their fortune, to keep them all “safe” from invading forces, and you’ll hear the truth about some of the Native American Mounds that even the Etowah are scared to go near. You’ll hear tales of heroism and stories of dark deeds that were never punished. You’ll learn where statues cry bloody tears and find out about the judge that took the law into his own hands and made sure the guilty were punished for crimes they thought they got away with.

You’ll discover the road where a little girl wanders when the sun sets, looking for her family dog, and some say running from the man who murdered her and her family alike. You’ll find out why the ghost of Ethan Crane still haunts one of the local churches and if the stories are true, still seeks the man who cut his eyes and heart from his body.

There are tales of Confederate Soldiers who wander along a dark road with plans to kill the Yankee conspirators who betrayed them, and legends of a battle that replays every hundred days, revealing the locations of where each person died and maybe even showing where treasure is buried if you pay attention to the clues.

All this and more await you in The Tourists Guide to Haunted Wellman, a book of stories meticulously studied and verified by the Brennert County Paranormal Society. We know what haunts you.

“Are we really doing this?” Emily Strand looked at the rest of the society members and spoke softly, her voice barely carrying far enough for anyone to hear.

Travis Dunlap heard her, of course. Travis would have heard Emily from twice as far away and if she were whispering as softly as she could because every word she said was very nearly holy in his mind. She owned his heart and he would marry her someday if he ever got up the nerve to actually speak to her.

Don Washington was the one who answered her question, of course. Don, who was twenty-six and knew more about the supernatural than most of them, was the Vice President of the Brennert County Paranormal Society, and he was the driving force behind the book they’d been writing and the plans they had to make sure that the ghosts were really there.

Well, none of them were really writing the book, they had a ghostwriter. Travis snorted when he thought about that. A ghostwriter for a book of ghost stories. Of course, Don didn't think that was funny at all. Don took everything as seriously as a heart attack.

“Yes, for the tenth time, we’re doing it, Emily. We have to make sure we’re onto something. The book says we can prove the existence of ghosts just by reciting the right words, at the right time, and in the right place.”

Don huffed and puffed and sighed. He was not in great shape, really. Okay, he was obese, as in carrying an extra person around his guts and butt. They’d been walking for close to a quarter-mile and most everyone was just fine, but Don was wheezing and red-faced. Okay, the clove cigarettes probably didn’t help very much.

“I thought Charon said it was a bad idea.” Emily really did whisper that time. Don rolled his eyes and shook his jowly face. “Charon doesn’t know everything. She’s got a bookstore that sells occult crap and Tarot cards. Everything there is over-priced and a rip-off. Have you seen the stupid books on local ghosts she has? Not even half as much stuff as we’re including in our book.” He hauled his pants back up to his waist as if that were a definitive statement about how foolish Charon was.

Travis grimaced. No one but Don thought poorly of Charon, and he only thought that way because she’d told him off about all the crazy experiments he wanted to do, like the one tonight. Charon's bookshop, Baba Yaga’s, was over in Gatesville and was probably the best-stocked occult bookstore north of Atlanta. It was the primary reason she didn't have much time to spend with the group anymore.

Don had the wild idea of “enhancing” the ghostly experience by making the restless dead more restless. He said it was like agitating fireflies: harmless, but effective. To that end he’d used Ouija boards, a dozen different “rituals” he’d found online, and had even hunted down a few books that he said were supposed to “thin the barrier between the living and the land of the dead.”

So far the only thing that had happened was they got to hang out together and wait, while nothing at all took place. Travis would have minded a lot more, but every time they got together for one of Don’s experiments, he managed to sit as close as he could to Emily.

Emily, who was just about as perfect as any girl had ever been. He could count the freckles on her face a million times (there were exactly thirty-seven of them) and never get tired of it. Emily, who was so quiet and shy, even though she had the greatest eyes ever behind her glasses. Emily, who probably didn’t even know his name, even though they went to school together and were in the society together.  Emily, who thought Mark Irvin was about the cutest guy on the planet if you judged the way she always looked at him.

He'd have hated Mark if the guy wasn't so damned nice.

“So that’s a yes.” Emily sighed and wrapped herself in her own arms to ward away the chill.

It was cold. Autumn was in the air, the sky was half-buried in clouds, and the wind that blew through the area came from the north and west. There was frost on some of the trees and the grass under their feet crunched in a way it never did during the summer.

The First United Methodist Church on Maynard Avenue stood like a shadowed guardian over the area as they moved into the cemetery. The side of the building held hundreds of pumpkins set up for sale, even though the pastor there was not overly fond of Halloween. As they moved past the gate into the graveyard the bell at the church rang out eleven times, the sound so much louder in the night than it seemed when Travis was at home.

They passed the subject of one of the entries in the book, a life-size marble statue of a woman in a flowing robe. Travis didn’t know if it was supposed to be the Virgin Mary or what, but local legend said that on full moons people had seen tears of blood in the statue’s eyes, and heard the sounds of a woman weeping. They wound their way through the tombstones, many of those the unmarked graves of fallen Civil War soldiers, until they found the spot they were looking for.

Don let out another epic sigh and grunted as he lowered himself to the grass near the headstone of William Avery Harrington. The stone was rather unremarkable, but the dates showed that the old man had died at exactly one hundred years of age, down to the day.  For the next fifteen minutes, all of them sat around while Don looked over the things he’d brought with him and then he directed each of them to a different position as he started carefully making marks on the lawn with a bright white powder and then other marks in charcoal black.

It was ten minutes to midnight before he said he was ready. By then Travis had sidled closer to Emily and then slipped back when she moved over to talk to Mark, damn his eyes.

The mood was solemn and despite his appearance—unkempt on the best of days—Don lowered his voice and spoke clearly as he said the words written out on an old piece of parchment.

He finished at exactly midnight, as the bells of the church rang through the night air. The bells sounded wrong to Travis’s ears. 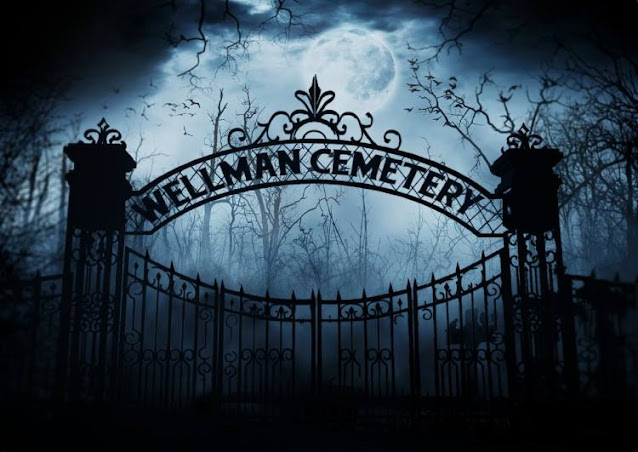